37 Bible Verses about election, privileges of 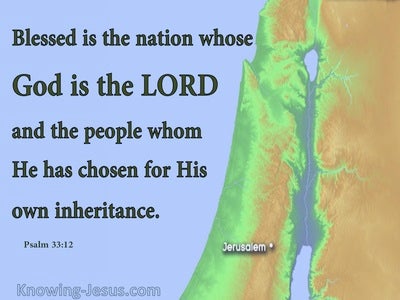 “You are the sons of the Lord your God; you shall not cut yourselves nor shave your forehead for the sake of the dead. For you are a holy people to the Lord your God, and the Lord has chosen you to be a people for His own possession out of all the peoples who are on the face of the earth.

1 Kings 3:8
Verse Concepts
Many In IsraelPeople Of God, In Ot
UncountableBlessings, To Abraham

Your servant is in the midst of Your people which You have chosen, a great people who are too many to be numbered or counted.

O seed of Israel His servant,
Sons of Jacob, His chosen ones!

Psalm 105:6
Verse Concepts
Servanthood, In Life Of BelieversServants Of The Lord
Names And Titles For The Christian

O seed of Abraham, His servant,
O sons of Jacob, His chosen ones!

Psalm 135:4
Verse Concepts
Jews As God's Chosen PeopleJacob, The PatriarchMonogamy
People Of God, In OtTreasureIsrael As The Elect

Because He loved your fathers, therefore He chose their descendants after them. And He personally brought you from Egypt by His great power, driving out from before you nations greater and mightier than you, to bring you in and to give you their land for an inheritance, as it is today.

Deuteronomy 10:15
Verse Concepts
God's Love For IsraelAffection
As At This Day

Yet on your fathers did the Lord set His affection to love them, and He chose their descendants after them, even you above all peoples, as it is this day.

The God of this people Israel chose our fathers and made the people great during their stay in the land of Egypt, and with an uplifted arm He led them out from it. For a period of about forty years He put up with them in the wilderness. When He had destroyed seven nations in the land of Canaan, He distributed their land as an inheritance—all of which took about four hundred and fifty years.

“The Lord did not set His love on you nor choose you because you were more in number than any of the peoples, for you were the fewest of all peoples, but because the Lord loved you and kept the oath which He swore to your forefathers, the Lord brought you out by a mighty hand and redeemed you from the house of slavery, from the hand of Pharaoh king of Egypt.

Then the word of the Lord came to me, saying, “Son of man, make known to Jerusalem her abominations and say, ‘Thus says the Lord God to Jerusalem, “Your origin and your birth are from the land of the Canaanite, your father was an Amorite and your mother a Hittite.read more.
As for your birth, on the day you were born your navel cord was not cut, nor were you washed with water for cleansing; you were not rubbed with salt or even wrapped in cloths. No eye looked with pity on you to do any of these things for you, to have compassion on you. Rather you were thrown out into the open field, for you were abhorred on the day you were born. “When I passed by you and saw you squirming in your blood, I said to you while you were in your blood, ‘Live!’ Yes, I said to you while you were in your blood, ‘Live!’ I made you numerous like plants of the field. Then you grew up, became tall and reached the age for fine ornaments; your breasts were formed and your hair had grown. Yet you were naked and bare. “Then I passed by you and saw you, and behold, you were at the time for love; so I spread My skirt over you and covered your nakedness. I also swore to you and entered into a covenant with you so that you became Mine,” declares the Lord God. “Then I bathed you with water, washed off your blood from you and anointed you with oil. I also clothed you with embroidered cloth and put sandals of porpoise skin on your feet; and I wrapped you with fine linen and covered you with silk. I adorned you with ornaments, put bracelets on your hands and a necklace around your neck. I also put a ring in your nostril, earrings in your ears and a beautiful crown on your head. Thus you were adorned with gold and silver, and your dress was of fine linen, silk and embroidered cloth. You ate fine flour, honey and oil; so you were exceedingly beautiful and advanced to royalty. Then your fame went forth among the nations on account of your beauty, for it was perfect because of My splendor which I bestowed on you,” declares the Lord God.

Now Rehoboam the son of Solomon reigned in Judah. Rehoboam was forty-one years old when he became king, and he reigned seventeen years in Jerusalem, the city which the Lord had chosen from all the tribes of Israel to put His name there. And his mother’s name was Naamah the Ammonitess.

So King Rehoboam strengthened himself in Jerusalem and reigned. Now Rehoboam was forty-one years old when he began to reign, and he reigned seventeen years in Jerusalem, the city which the Lord had chosen from all the tribes of Israel, to put His name there. And his mother’s name was Naamah the Ammonitess.

Then he set the carved image of Asherah that he had made, in the house of which the Lord said to David and to his son Solomon, “In this house and in Jerusalem, which I have chosen from all the tribes of Israel, I will put My name forever.

Then he put the carved image of the idol which he had made in the house of God, of which God had said to David and to Solomon his son, “In this house and in Jerusalem, which I have chosen from all the tribes of Israel, I will put My name forever;

“When Your people go out to battle against their enemies, by whatever way You shall send them, and they pray to You toward this city which You have chosen and the house which I have built for Your name, then hear from heaven their prayer and their supplication, and maintain their cause.

Then the Lord appeared to Solomon at night and said to him, “I have heard your prayer and have chosen this place for Myself as a house of sacrifice.

but if you return to Me and keep My commandments and do them, though those of you who have been scattered were in the most remote part of the heavens, I will gather them from there and will bring them to the place where I have chosen to cause My name to dwell.’

For the Lord has chosen Zion;
He has desired it for His habitation.

Blessed is the nation whose God is the Lord,
The people whom He has chosen for His own inheritance.

Psalm 65:4
Verse Concepts
We Live With GodBlessed Through GodGoodnessAccess To God, The Characteristics Of
Approaching GodPlenty Through GodChoicesdrawing near to God

How blessed is the one whom You choose and bring near to You
To dwell in Your courts.
We will be satisfied with the goodness of Your house,
Your holy temple.

When the Lord will have compassion on Jacob and again choose Israel, and settle them in their own land, then strangers will join them and attach themselves to the house of Jacob.

Isaiah 43:1
Verse Concepts
People Belong To GodDo Not Fear For God Will HelpredeemedAnxietyUniqueness
God, As RedeemerClaimsBuying and sellingPeople Of God, In OtMan's Relationship With His Creator

But now, thus says the Lord, your Creator, O Jacob,
And He who formed you, O Israel,
“Do not fear, for I have redeemed you;
I have called you by name; you are Mine!

“But now listen, O Jacob, My servant,
And Israel, whom I have chosen:
Thus says the Lord who made you
And formed you from the womb, who will help you,
‘Do not fear, O Jacob My servant;
And you Jeshurun whom I have chosen.
‘For I will pour out water on the thirsty land
And streams on the dry ground;
I will pour out My Spirit on your offspring
And My blessing on your descendants;
read more.
And they will spring up among the grass
Like poplars by streams of water.’
“This one will say, ‘I am the Lord’s’;
And that one will call on the name of Jacob;
And another will write on his hand, ‘Belonging to the Lord,’
And will name Israel’s name with honor.

Isaiah 45:4
Verse Concepts
People Have HonourFor The Sake Of God's PeopleElection, Description Of
Israel As The ElectCalling, Of IndividualsGod, All knowing

Thus you are to be holy to Me, for I the Lord am holy; and I have set you apart from the peoples to be Mine.

Now then, if you will indeed obey My voice and keep My covenant, then you shall be My own possession among all the peoples, for all the earth is Mine; and you shall be to Me a kingdom of priests and a holy nation.’ These are the words that you shall speak to the sons of Israel.”

However, the Lord did not turn from the fierceness of His great wrath with which His anger burned against Judah, because of all the provocations with which Manasseh had provoked Him.

What then? What Israel is seeking, it has not obtained, but those who were chosen obtained it, and the rest were hardened; just as it is written,
“God gave them a spirit of stupor,
Eyes to see not and ears to hear not,
Down to this very day.”