18 Bible Verses about Jesus As Our Teacher 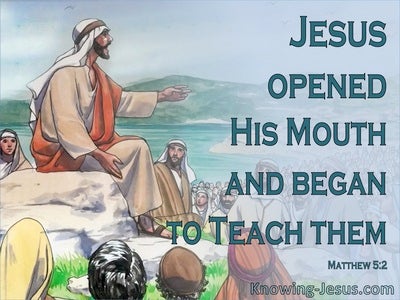 Then Jesus travelled through all Galilee, teaching in their synagogues and proclaiming the Good News of the Kingdom, and curing every kind of disease and infirmity among the people.

He proceeded to teach them, and said:

for He had been teaching them as one who had authority, and not as their Scribes taught.

So when Jesus landed, He saw a vast multitude; and His heart was moved with pity for them, because they were like sheep which have no shepherd, and He proceeded to teach them many things.

And He proceeded to teach in their synagogues, winning praise from all.

and going on board one of them, which was Simon's He asked him to push out a little from land. Then He sat down and taught the crowd of people from the boat.

He came to Jesus by night and said, "Rabbi, we know that you are a teacher from God; for no one can do these miracles which you are doing, unless God is with him.

But when the Festival was already half over, Jesus went up to the Temple and commenced teaching.

At break of day however He returned to the Temple, and there the people came to Him in crowds. He seated Himself;

"The sower of the good seed," He replied, "is the Son of Man;

Matthew 24:33
Verse Concepts
Near The Time GenerallyThe End Of The WorldspringtimeSigns Of The End TimesThe Second ComingSigns Of The Times
Day of the LORDDoorsExposition Of The ScripturesEnd TimesThe RaptureSeasons Changing

So you also, when you see all these signs, may be sure that He is near--at your very door.

But except in figurative language He spoke nothing to them; while to His own disciples He expounded everything, in private.

The meaning of the parable is as follows. The seed is God's Message.

When Jesus had concluded this discourse, the crowds were filled with amazement at His teaching,

Then He proceeded to teach them many lessons in figurative language; and in His teaching He said,

Jesus answered their question by saying, "My teaching does not belong to me, but comes from Him who sent me.

No one has God, who instead of remaining true to the teaching of Christ, presses on in advance: but he who remains true to that teaching has both the Father and the Son.