43 Bible Verses about Gifts And Talents 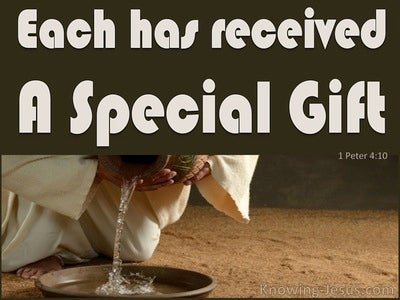 Do not neglect the gift that is in you, which was given to you by prophecy, with the laying on of the hands of the elders.

For even as we have many members in one body, and all the members do not have the same function,

A man's gift makes room for him, and brings him before great men.

"For it is like a man, going on a journey, who called his own servants, and entrusted his goods to them.

Now there are various kinds of gifts, but the same Spirit.

But to each one of us was the grace given according to the measure of the gift of Christ.

For to one is given through the Spirit the word of wisdom, and to another the word of knowledge, according to the same Spirit;

But to each one is given the manifestation of the Spirit for the profit of all.

and I have filled him with the Spirit of God, in wisdom, and in understanding, and in knowledge, and in all manner of workmanship,

For this cause, I remind you that you should stir up the gift of God which is in you through the laying on of my hands.

Now concerning spiritual things, brothers, I do not want you to be ignorant.

1 Corinthians 7:7
Verse Concepts
the Gifts of GodPurityCelibacyDifferent Things
Like People In CharacterGiving, Of TalentsSinglenessBeing Single

Yet I wish that all men were like me. However each man has his own gift from God, one of this kind, and another of that kind.

Do all have gifts of healings? Do all speak with various languages? Do all interpret?

or service, let us give ourselves to service; or he who teaches, to his teaching;

Take away therefore the talent from him, and give it to him who has the ten talents.

Follow after love, and earnestly desire spiritual gifts, but especially that you may prophesy.

Also that every man should eat and drink, and enjoy good in all his labor, is the gift of God.

Because of your temple at Jerusalem, kings shall bring presents to you.

So also you, since you are zealous for spiritual gifts, seek that you may abound to the building up of the church.

so that you are not lacking in any gift, as you wait for the revelation of our Lord Jesus Christ;

He said therefore, "A certain nobleman went into a far country to receive for himself a kingdom, and to return.

God has set some in the church: first apostles, second prophets, third teachers, then miracle workers, then gifts of healings, helps, governments, and various kinds of languages.

Now the weight of gold that came to Solomon in one year was six hundred sixty-six talents of gold,

Every good gift and every perfect gift is from above, coming down from the Father of lights, with whom can be no variation, nor turning shadow.

For who makes you different? And what do you have that you did not receive? But if you did receive it, why do you boast as if you had not received it?

For to everyone who has will be given, and he will have abundance, but from him who does not have, even that which he has will be taken away.