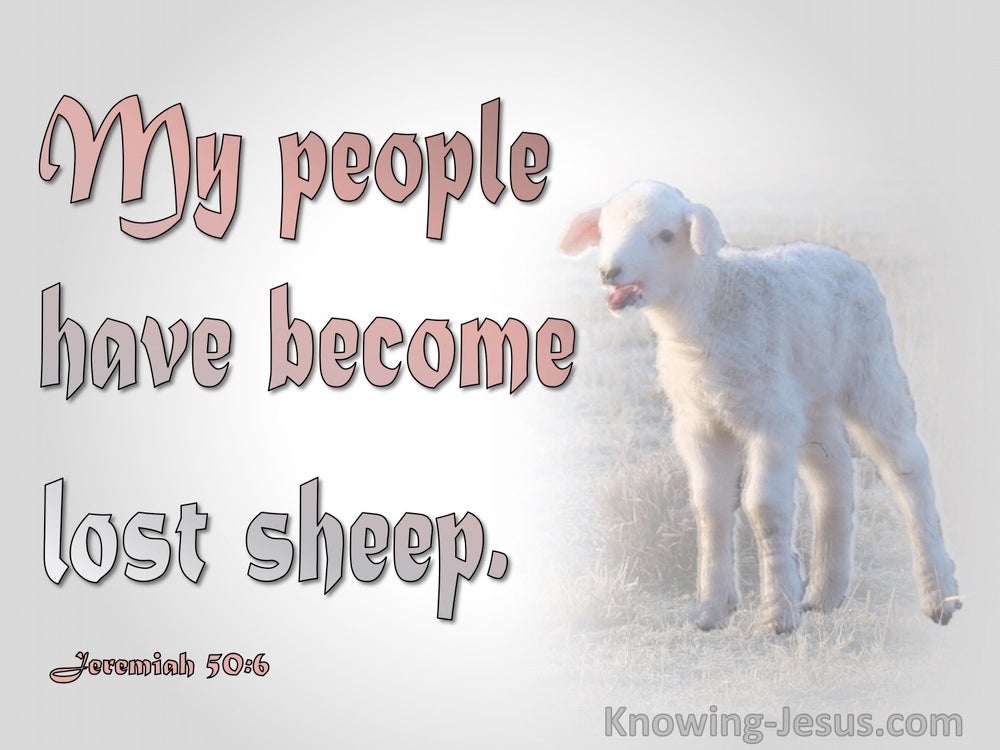 “Woe to the shepherds who are destroying and scattering the sheep of My pasture!” declares the Lord.

Jeremiah 2:8
Verse Concepts
Where Is God?Prophets Of Other GodsStudying The Law
Baal Worship, HistoryPriests, Function In Ot Times

“The priests did not say, ‘Where is the Lord?’
And those who handle the law did not know Me;
The rulers also transgressed against Me,
And the prophets prophesied by Baal
And walked after things that did not profit.

For behold, I am going to raise up a shepherd in the land who will not care for the perishing, seek the scattered, heal the broken, or sustain the one standing, but will devour the flesh of the fat sheep and tear off their hoofs. “Woe to the worthless shepherd
Who leaves the flock!
A sword will be on his arm
And on his right eye!
His arm will be totally withered
And his right eye will be blind.”

And the dogs are greedy, they are not satisfied.
And they are shepherds who have no understanding;
They have all turned to their own way,
Each one to his unjust gain, to the last one.

“Son of man, prophesy against the shepherds of Israel. Prophesy and say to those shepherds, ‘Thus says the Lord God, “Woe, shepherds of Israel who have been feeding themselves! Should not the shepherds feed the flock? You eat the fat and clothe yourselves with the wool, you slaughter the fat sheep without feeding the flock. Those who are sickly you have not strengthened, the diseased you have not healed, the broken you have not bound up, the scattered you have not brought back, nor have you sought for the lost; but with force and with severity you have dominated them.read more.
They were scattered for lack of a shepherd, and they became food for every beast of the field and were scattered. My flock wandered through all the mountains and on every high hill; My flock was scattered over all the surface of the earth, and there was no one to search or seek for them.”’” Therefore, you shepherds, hear the word of the Lord: “As I live,” declares the Lord God, “surely because My flock has become a prey, My flock has even become food for all the beasts of the field for lack of a shepherd, and My shepherds did not search for My flock, but rather the shepherds fed themselves and did not feed My flock; therefore, you shepherds, hear the word of the Lord: ‘Thus says the Lord God, “Behold, I am against the shepherds, and I will demand My sheep from them and make them cease from feeding sheep. So the shepherds will not feed themselves anymore, but I will deliver My flock from their mouth, so that they will not be food for them.”’”

Jeremiah 12:10
Verse Concepts
Destroying VineyardsNames And Titles For The ChurchDisorganization
Shepherds, As Kings And LeadersVineyard

“Many shepherds have ruined My vineyard,
They have trampled down My field;
They have made My pleasant field
A desolate wilderness.

Therefore, you shepherds, hear the word of the Lord:

therefore, you shepherds, hear the word of the Lord:

Your shepherds are sleeping, O king of Assyria;
Your nobles are lying down.
Your people are scattered on the mountains
And there is no one to regather them.

Then I annihilated the three shepherds in one month, for my soul was impatient with them, and their soul also was weary of me.

Zechariah 11:9
Verse Concepts
losing a loved oneDyingRepulsive Food
How Death Is InevitableLoss Of A Loved One

Then I said, “I will not pasture you. What is to die, let it die, and what is to be annihilated, let it be annihilated; and let those who are left eat one another’s flesh.”

“My anger is kindled against the shepherds,
And I will punish the male goats;
For the Lord of hosts has visited His flock, the house of Judah,
And will make them like His majestic horse in battle.

Those who buy them slay them and go unpunished, and each of those who sell them says, ‘Blessed be the Lord, for I have become rich!’ And their own shepherds have no pity on them.

Jeremiah 49:19
Verse Concepts
The Region Of JordanChallengesShepherds, As Kings And Leaders
God Like A LionWho Is Like God?Leadership Qualities

Behold, one will come up like a lion from the thickets of the Jordan against a perennially watered pasture; for in an instant I will make him run away from it, and whoever is chosen I shall appoint over it. For who is like Me, and who will summon Me into court? And who then is the shepherd who can stand against Me?”

Jeremiah 50:44
Verse Concepts
The Region Of JordanGod Like A LionWho Is Like God?
ChallengesShepherds, As Kings And Leaders

“Behold, one will come up like a lion from the thicket of the Jordan to a perennially watered pasture; for in an instant I will make them run away from it, and whoever is chosen I will appoint over it. For who is like Me, and who will summon Me into court? And who then is the shepherd who can stand before Me?”

For the teraphim speak iniquity,
And the diviners see lying visions
And tell false dreams;
They comfort in vain.
Therefore the people wander like sheep,
They are afflicted, because there is no shepherd.
“My anger is kindled against the shepherds,
And I will punish the male goats;
For the Lord of hosts has visited His flock, the house of Judah,
And will make them like His majestic horse in battle.

Numbers 27:17
Verse Concepts
Going Out And Coming In
People Going Before

who will go out and come in before them, and who will lead them out and bring them in, so that the congregation of the Lord will not be like sheep which have no shepherd.”

“Awake, O sword, against My Shepherd,
And against the man, My Associate,”
Declares the Lord of hosts.
“Strike the Shepherd that the sheep may be scattered;
And I will turn My hand against the little ones.

Then Jesus *said to them, “You will all fall away because of Me this night, for it is written, ‘I will strike down the shepherd, and the sheep of the flock shall be scattered.’

Mark 14:27
Verse Concepts
Christ Would Be KilledSheep, FigurativeJesus Foretelling His Resurrection
Unfaithfulness, To PeopleThe Smiting Of JesusScattered Like Sheep

As sheep they are appointed for Sheol;
Death shall be their shepherd;
And the upright shall rule over them in the morning,
And their form shall be for Sheol to consume
So that they have no habitation.