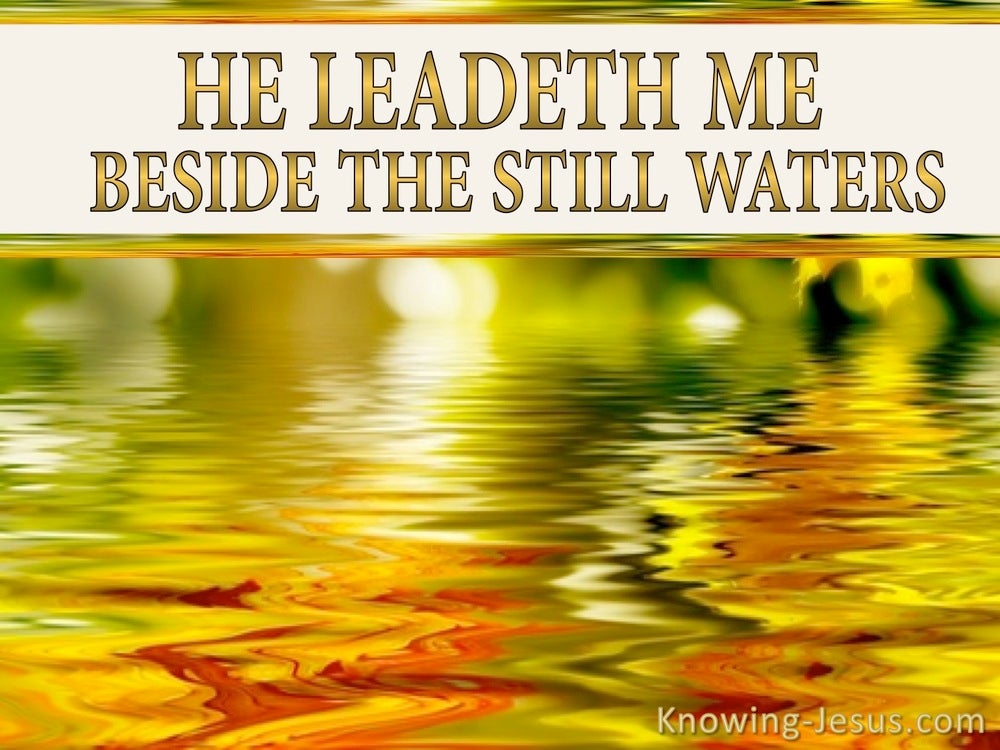 and the men are shepherds, for they have been keepers of livestock; and they have brought their flocks and their herds and all that they have.’

He makes me lie down in green pastures;
He leads me beside quiet waters.

But when Isaac’s servants dug in the valley and found there a well of flowing water, the herdsmen of Gerar quarreled with the herdsmen of Isaac, saying, “The water is ours!” So he named the well Esek, because they contended with him. Then they dug another well, and they quarreled over it too, so he named it Sitnah.read more.
He moved away from there and dug another well, and they did not quarrel over it; so he named it Rehoboth, for he said, “At last the Lord has made room for us, and we will be fruitful in the land.”

But the Lord answered him and said, “You hypocrites, does not each of you on the Sabbath untie his ox or his donkey from the stall and lead him away to water him?

Jeremiah 31:10
Verse Concepts
Shepherds, As Kings And LeadersGod, As ShepherdChrist And His Sheepdispersion, the
Gathering IsraelIslandsPeople Of God, In Ot

Again, she gave birth to his brother Abel. And Abel was a keeper of flocks, but Cain was a tiller of the ground.

To him the doorkeeper opens, and the sheep hear his voice, and he calls his own sheep by name and leads them out. When he puts forth all his own, he goes ahead of them, and the sheep follow him because they know his voice.

Now Moses was pasturing the flock of Jethro his father-in-law, the priest of Midian; and he led the flock to the west side of the wilderness and came to Horeb, the mountain of God.

To him the doorkeeper opens, and the sheep hear his voice, and he calls his own sheep by name and leads them out.

He counts the number of the stars;
He gives names to all of them.

Then the man said, “They have moved from here; for I heard them say, ‘Let us go to Dothan.’” So Joseph went after his brothers and found them at Dothan.

And I shall set fire to the temples of the gods of Egypt, and he will burn them and take them captive. So he will wrap himself with the land of Egypt as a shepherd wraps himself with his garment, and he will depart from there safely.

Now I have heard that you have shearers; now your shepherds have been with us and we have not insulted them, nor have they missed anything all the days they were in Carmel. Ask your young men and they will tell you. Therefore let my young men find favor in your eyes, for we have come on a festive day. Please give whatever you find at hand to your servants and to your son David.’”

“Truly, truly, I say to you, he who does not enter by the door into the fold of the sheep, but climbs up some other way, he is a thief and a robber.

Jacob separated the lambs, and made the flocks face toward the striped and all the black in the flock of Laban; and he put his own herds apart, and did not put them with Laban’s flock.

And she put the skins of the young goats on his hands and on the smooth part of his neck.

How long is the land to mourn
And the vegetation of the countryside to wither?
For the wickedness of those who dwell in it,
Animals and birds have been snatched away,
Because men have said, “He will not see our latter ending.”

Therefore the land mourns,
And everyone who lives in it languishes
Along with the beasts of the field and the birds of the sky,
And also the fish of the sea disappear.

Though he flourishes among the reeds,
An east wind will come,
The wind of the Lord coming up from the wilderness;
And his fountain will become dry
And his spring will be dried up;
It will plunder his treasury of every precious article.

The seeds shrivel under their clods;
The storehouses are desolate,
The barns are torn down,
For the grain is dried up.
How the beasts groan!
The herds of cattle wander aimlessly
Because there is no pasture for them;
Even the flocks of sheep suffer.
To You, O Lord, I cry;
For fire has devoured the pastures of the wilderness
And the flame has burned up all the trees of the field.
read more.
Even the beasts of the field pant for You;
For the water brooks are dried up
And fire has devoured the pastures of the wilderness.

He said,
“The Lord roars from Zion
And from Jerusalem He utters His voice;
And the shepherds’ pasture grounds mourn,
And the summit of Carmel dries up.”

Yet the men were very good to us, and we were not insulted, nor did we miss anything as long as we went about with them, while we were in the fields.

Now there was a man in Maon whose business was in Carmel; and the man was very rich, and he had three thousand sheep and a thousand goats. And it came about while he was shearing his sheep in Carmel

The words of Amos, who was among the sheepherders from Tekoa, which he envisioned in visions concerning Israel in the days of Uzziah king of Judah, and in the days of Jeroboam son of Joash, king of Israel, two years before the earthquake.

Now Eliab his oldest brother heard when he spoke to the men; and Eliab’s anger burned against David and he said, “Why have you come down? And with whom have you left those few sheep in the wilderness? I know your insolence and the wickedness of your heart; for you have come down in order to see the battle.”

That which was torn of beasts I did not bring to you; I bore the loss of it myself. You required it of my hand whether stolen by day or stolen by night.

Thus says the Lord,
“Just as the shepherd snatches from the lion’s mouth a couple of legs or a piece of an ear,
So will the sons of Israel dwelling in Samaria be snatched away—
With the corner of a bed and the cover of a couch!