40 Bible Verses about Riches, Nature Of 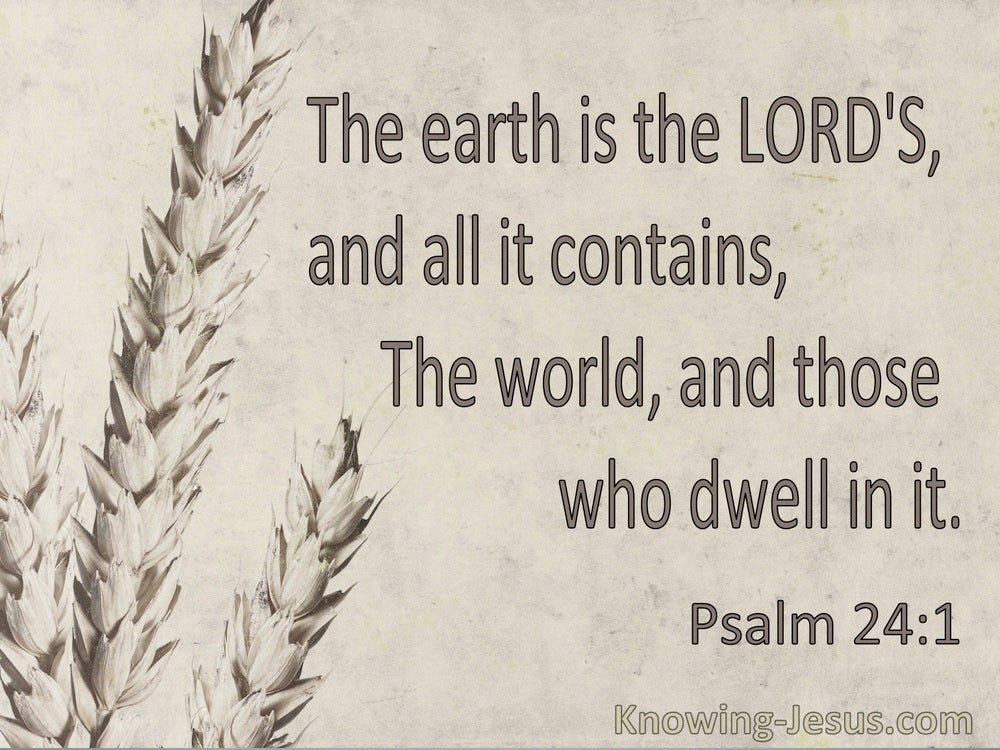 A Psalm of David.
The earth is the Lord’s, and all it contains,
The world, and those who dwell in it.
For He has founded it upon the seas
And established it upon the rivers.

Job 41:11
Verse Concepts
All Things Belong To GodGod's Ownership Of Everything
Claims

“Who has given to Me that I should repay him?
Whatever is under the whole heaven is Mine.

“If I were hungry I would not tell you,
For the world is Mine, and all it contains.

‘The silver is Mine and the gold is Mine,’ declares the Lord of hosts.

Both riches and honor come from You, and You rule over all, and in Your hand is power and might; and it lies in Your hand to make great and to strengthen everyone.

wisdom and knowledge have been granted to you. And I will give you riches and wealth and honor, such as none of the kings who were before you has possessed nor those who will come after you.”

Otherwise, you may say in your heart, ‘My power and the strength of my hand made me this wealth.’ But you shall remember the Lord your God, for it is He who is giving you power to make wealth, that He may confirm His covenant which He swore to your fathers, as it is this day.

Now Isaac sowed in that land and reaped in the same year a hundredfold. And the Lord blessed him, and the man became rich, and continued to grow richer until he became very wealthy;

It is the blessing of the Lord that makes rich,
And He adds no sorrow to it.

Amaziah said to the man of God, “But what shall we do for the hundred talents which I have given to the troops of Israel?” And the man of God answered, “The Lord has much more to give you than this.”

Then Satan answered the Lord, “Does Job fear God for nothing? Have You not made a hedge about him and his house and all that he has, on every side? You have blessed the work of his hands, and his possessions have increased in the land.

Praise the Lord!
How blessed is the man who fears the Lord,
Who greatly delights in His commandments.
His descendants will be mighty on earth;
The generation of the upright will be blessed.
Wealth and riches are in his house,
And his righteousness endures forever.

A Song of Ascents.
How blessed is everyone who fears the Lord,
Who walks in His ways.
When you shall eat of the fruit of your hands,
You will be happy and it will be well with you.

“I love those who love me;
And those who diligently seek me will find me.
“Riches and honor are with me,
Enduring wealth and righteousness.

For everything created by God is good, and nothing is to be rejected if it is received with gratitude; for it is sanctified by means of the word of God and prayer.

The Israelites, all the men and women, whose heart moved them to bring material for all the work, which the Lord had commanded through Moses to be done, brought a freewill offering to the Lord.

Then the rulers of the fathers’ households, and the princes of the tribes of Israel, and the commanders of thousands and of hundreds, with the overseers over the king’s work, offered willingly; and for the service for the house of God they gave 5,000 talents and 10,000 darics of gold, and 10,000 talents of silver, and 18,000 talents of brass, and 100,000 talents of iron.

Zaccheus stopped and said to the Lord, “Behold, Lord, half of my possessions I will give to the poor, and if I have defrauded anyone of anything, I will give back four times as much.”

Then he said, ‘This is what I will do: I will tear down my barns and build larger ones, and there I will store all my grain and my goods.

For riches are not forever,
Nor does a crown endure to all generations.

The fruit you long for has gone from you, and all things that were luxurious and splendid have passed away from you and men will no longer find them. The merchants of these things, who became rich from her, will stand at a distance because of the fear of her torment, weeping and mourning, saying, ‘Woe, woe, the great city, she who was clothed in fine linen and purple and scarlet, and adorned with gold and precious stones and pearls;read more.
for in one hour such great wealth has been laid waste!’ And every shipmaster and every passenger and sailor, and as many as make their living by the sea, stood at a distance, and were crying out as they saw the smoke of her burning, saying, ‘What city is like the great city?’ And they threw dust on their heads and were crying out, weeping and mourning, saying, ‘Woe, woe, the great city, in which all who had ships at sea became rich by her wealth, for in one hour she has been laid waste!’ Rejoice over her, O heaven, and you saints and apostles and prophets, because God has pronounced judgment for you against her.”

The world is passing away, and also its lusts; but the one who does the will of God lives forever.

Someone in the crowd said to Him, “Teacher, tell my brother to divide the family inheritance with me.” But He said to him, “Man, who appointed Me a judge or arbitrator over you?” Then He said to them, “Beware, and be on your guard against every form of greed; for not even when one has an abundance does his life consist of his possessions.”read more.
And He told them a parable, saying, “The land of a rich man was very productive. And he began reasoning to himself, saying, ‘What shall I do, since I have no place to store my crops?’ Then he said, ‘This is what I will do: I will tear down my barns and build larger ones, and there I will store all my grain and my goods. And I will say to my soul, “Soul, you have many goods laid up for many years to come; take your ease, eat, drink and be merry.”’ But God said to him, ‘You fool! This very night your soul is required of you; and now who will own what you have prepared?’ So is the man who stores up treasure for himself, and is not rich toward God.”

But godliness actually is a means of great gain when accompanied by contentment. For we have brought nothing into the world, so we cannot take anything out of it either. If we have food and covering, with these we shall be content.