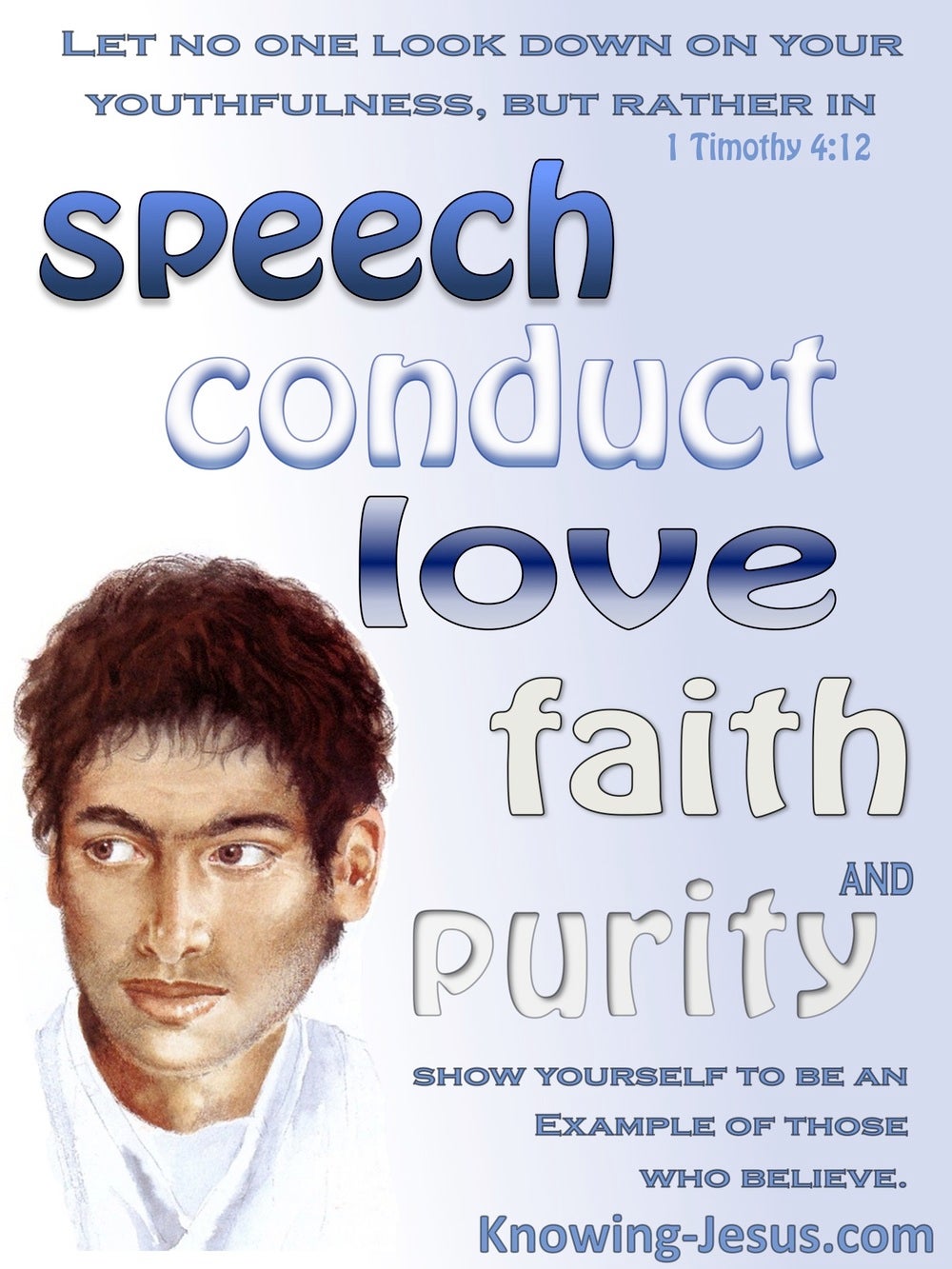 Likewise urge the young men to be sensible;

My son, keep my words
And treasure my commandments within you.

Beth.
How can a young man keep his way pure?
By keeping it according to Your word.

And someone came to Him and said, "Teacher, what good thing shall I do that I may obtain eternal life?" And He said to him, "Why are you asking Me about what is good? There is only One who is good; but if you wish to enter into life, keep the commandments." Then he said to Him, "Which ones?" And Jesus said, "YOU SHALL NOT COMMIT MURDER; YOU SHALL NOT COMMIT ADULTERY; YOU SHALL NOT STEAL; YOU SHALL NOT BEAR FALSE WITNESS; read more.
HONOR YOUR FATHER AND MOTHER; and YOU SHALL LOVE YOUR NEIGHBOR AS YOURSELF." The young man said to Him, "All these things I have kept; what am I still lacking?" Jesus said to him, "If you wish to be complete, go and sell your possessions and give to the poor, and you will have treasure in heaven; and come, follow Me." But when the young man heard this statement, he went away grieving; for he was one who owned much property.

As He was setting out on a journey, a man ran up to Him and knelt before Him, and asked Him, "Good Teacher, what shall I do to inherit eternal life?" And Jesus said to him, "Why do you call Me good? No one is good except God alone. "You know the commandments, 'DO NOT MURDER, DO NOT COMMIT ADULTERY, DO NOT STEAL, DO NOT BEAR FALSE WITNESS, Do not defraud, HONOR YOUR FATHER AND MOTHER.'" read more.
And he said to Him, "Teacher, I have kept all these things from my youth up." Looking at him, Jesus felt a love for him and said to him, "One thing you lack: go and sell all you possess and give to the poor, and you will have treasure in heaven; and come, follow Me." But at these words he was saddened, and he went away grieving, for he was one who owned much property.

A ruler questioned Him, saying, "Good Teacher, what shall I do to inherit eternal life?" And Jesus said to him, "Why do you call Me good? No one is good except God alone. "You know the commandments, 'DO NOT COMMIT ADULTERY, DO NOT MURDER, DO NOT STEAL, DO NOT BEAR FALSE WITNESS, HONOR YOUR FATHER AND MOTHER.'" read more.
And he said, "All these things I have kept from my youth." When Jesus heard this, He said to him, "One thing you still lack; sell all that you possess and distribute it to the poor, and you shall have treasure in heaven; and come, follow Me." But when he had heard these things, he became very sad, for he was extremely rich.

Jehoash did right in the sight of the Lord all his days in which Jehoiada the priest instructed him.

Joash was seven years old when he became king, and he reigned forty years in Jerusalem; and his mother's name was Zibiah from Beersheba. Joash did what was right in the sight of the LORD all the days of Jehoiada the priest.

Josiah was eight years old when he became king, and he reigned thirty-one years in Jerusalem. He did right in the sight of the LORD, and walked in the ways of his father David and did not turn aside to the right or to the left. For in the eighth year of his reign while he was still a youth, he began to seek the God of his father David; and in the twelfth year he began to purge Judah and Jerusalem of the high places, the Asherim, the carved images and the molten images.

Then Pharaoh said to his servants, “Can we find a man like this,

And Jacob said, "First swear to me"; so he swore to him, and sold his birthright to Jacob. Then Jacob gave Esau bread and lentil stew; and he ate and drank, and rose and went on his way. Thus Esau despised his birthright.

1 Samuel 17:33
Verse Concepts
Children, examples ofInexperienceMiddle AgeYouth
Limitations Of YouthWork From YouthUnable To Do Other Things

Then Saul said to David, “

Manasseh was twelve years old when he became king, and he reigned fifty-five years in Jerusalem; and his mother's name was Hephzibah. He did evil in the sight of the LORD, according to the abominations of the nations whom the LORD dispossessed before the sons of Israel.

They took their bones and

In this manner Absalom dealt with all Israel who came to the king for judgment;

His sons, however, did not walk in his ways, but turned aside after dishonest gain and