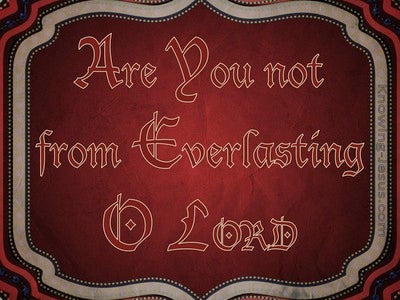 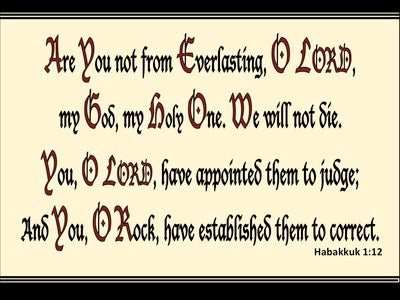 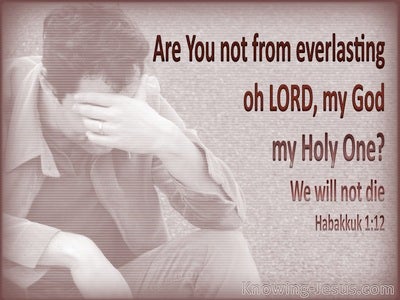 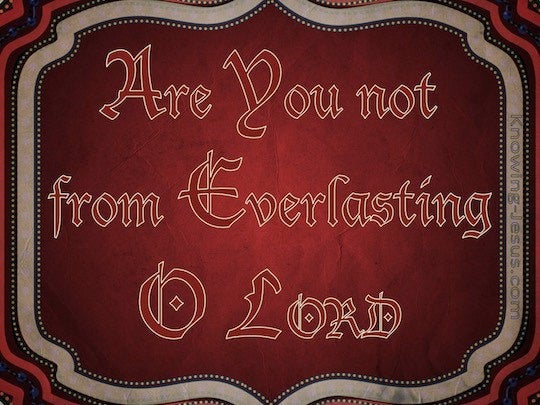 "Haven't you existed forever, LORD my God, my Holy One? We won't die! LORD, you've prepared them for judgment; Rock, you've sentenced them to correction.

Art thou not from everlasting, O LORD my God, mine Holy One? we shall not die. O LORD, thou hast ordained them for judgment; and, O mighty God, thou hast established them for correction.

Are not thou from everlasting, O LORD my God, my Holy One? We shall not die. O LORD, thou have ordained him for judgment, and thou, O Rock, have established him for correction.

Art not thou from everlasting, O Jehovah my God, my Holy One? we shall not die. O Jehovah, thou hast ordained him for judgment; and thou, O Rock, hast established him for correction.

Are you not eternal, O Lord my God, my Holy One? for you there is no death. O Lord, he has been ordered by you for our punishment; and by you, O Rock, he has been marked out to put us right.

Art thou not from everlasting, Jehovah my God, my Holy One? We shall not die. Jehovah, thou hast ordained him for judgment; and thou, O Rock, hast appointed him for correction.

Art thou not from of old, O Jehovah, my holy God? We shall not die. O Jehovah, thou didst set him for judgment; and O Rock, thou didst found him for correction.

Are you not from everlasting, O LORD my God, my Holy One? we shall not die. O LORD, you have ordained them for judgment; and, O mighty God, you have established them for correction.

Are you not from of old, O Yahweh my God, my Holy One? You shall not die. O Yahweh, you have marked them for judgment; O Rock, you have established them for reproof.

Are You not from everlasting, O Jehovah my God, my Holy One? We shall not die. O Jehovah, You have ordained them for judgment; and, my Rock, You have established them for correction.

But thou, O LORD my God, my holy one: thou art from the beginning, therefore shall we not die. O LORD, thou hast ordained them for punishment, and set them to reprove the mighty.

Aren't you from everlasting, LORD my God, my Holy One? We will not die. LORD, you have appointed him for judgment. You, Rock, have established him to punish.

Art not, thou, from of old, O Yahweh, my God, my Holy One? Thou diest not! O Yahweh, to judgment, hast thou appointed him, and, O Rock, to correction, hast thou devoted him:

Art thou not from everlasting, O LORD my God, my Holy One? We shall not die. O LORD, thou hast ordained them for judgment; and O mighty God, thou hast established them for correction.

Aren't you from everlasting, Yahweh my God, my Holy One? We will not die. Yahweh, you have appointed him for judgment. You, Rock, have established him to punish.

Art not Thou of old, O Jehovah, my God, my Holy One? We do not die, O Jehovah, For judgment Thou hast appointed it, And, O Rock, for reproof Thou hast founded it.

Providence, Of God In History

Word Count of 20 Translations in Habakkuk 1:12 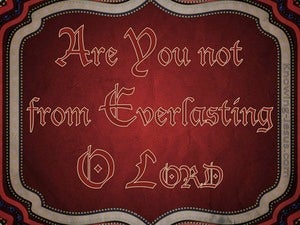 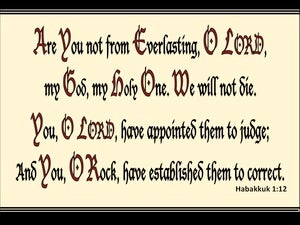 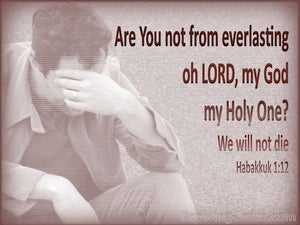 11 Then like the wind sweeping by they will pass through they're guilty because they say their power is their god." 12 "Haven't you existed forever, LORD my God, my Holy One? We won't die! LORD, you've prepared them for judgment; Rock, you've sentenced them to correction. 13 Your eyes are too pure to gaze upon evil; and you cannot tolerate wickedness. So why do you tolerate the treacherous? And why do you stay silent while the wicked devour those who are more righteous than they are?

Flawless is the work of the Rock, because all his ways are just. A faithful God never unjust righteous and upright is he.

The God of old is a dwelling place, with everlasting arms underneath. He drove out your enemies before you and said: "Destroy them!'

Before the mountains were formed or the earth and the world were brought forth, you are God from eternity to eternity.

For I'll be with you to save you,' declares the LORD. "For I'll put an end to all the nations where I scattered you; but I won't make an end of you. I'll discipline you justly, but I certainly won't leave you unpunished.'

"As for you, my servant Jacob, don't be afraid, and Israel, don't be dismayed," declares the LORD, "for I am with you. Indeed, I'll make an end of all the nations where I scattered you; but I won't make an end of you! I'll discipline you justly, but I'll certainly not leave you unpunished."

Your throne has been established since time immemorial; you are king from eternity.

"How terrible it will be for Assyria, the rod of my anger! The club is in their hands!

How can one person chase a thousand of them and two put a myriad to flight, unless their Rock delivers them and the LORD gives them up?

"Didn't you hear? I determined it years ago! I planned this from ancient times, and now I've brought it to pass, to turn fortified cities into piles of ruins

Arise, LORD, confront them, bring them to their knees! Deliver me from the wicked by your sword

He said: "I love you, Lord, my strength.

I will not die, but I will live to recount the deeds of the LORD.

In times to come, Jacob will take root, and Israel will blossom, sprout shoots, and fill the whole world with fruit.

""Didn't you hear how in the distant past I decided to do it, how I planned from days of old? Now I've made it happen that fortified cities become devastated, besieged heaps.

Don't you know? Haven't you heard? The LORD is the eternal God, the Creator of the ends of the earth. He does not grow tired or weary; and his understanding cannot be fathomed.

I am the LORD, your Holy One, Creator of Israel, and your King."

"This is what my Lord says the LORD your Redeemer, O Israel, and his Holy One to one despised by people, to those abhorred as a nation, to the servant of rulers: "Kings see and arise, and princes will bow down, because of the LORD who is faithful, the Holy One of Israel, the one who has chosen you."

"For this is what the high and lofty One says, who inhabits eternity, whose name is Holy: "He lives in the height and in holiness, and also with the one who is of a contrite and humble spirit, to revive the spirit of the humble, and to revive the heart of the contrite.

For this is what the LORD says: "The entire land will be devastated, but I won't completely destroy it.

"Yet even in those days," declares the LORD, "I won't destroy you completely.

I'm now sending for all the tribes from the north, declares the LORD, and for my servant Nebuchadnezzar king of Babylon. I'll bring them against this land, against its inhabitants, and against all these surrounding nations. I'll utterly destroy them and make them an object of horror and scorn, and an everlasting desolation.

"I've certainly heard Ephraim shuddering with grief as they said, "You have disciplined me, and I'm disciplined like an untrained calf. Restore me, and let me return, for you are the LORD my God.

"Haven't you noticed what these people have been saying? "The LORD rejected the two families that he had chosen!' They have contempt for my people and no longer consider them a nation.

You, LORD, are forever your throne endures from generation to generation.

"These bones represent the entire house of Israel," the LORD explained to me. "Look how they keep saying, "Our bones are dried up, and our future is lost. We've been completely eliminated!'

Look! The eyes of the Lord GOD are on the sinful kingdom. I will destroy it from the face of the earth; but I will not totally destroy the house of Jacob," declares the LORD.

"As for you, Bethlehem of Ephrathah, even though you remain least among the clans of Judah, nevertheless, the one who rules in Israel for me will emerge from you. His existence has been from antiquity, even from eternity.

"Because I the LORD don't change; therefore you children of Jacob aren't destroyed."

You rejected the Holy and Righteous One and asked to have a murderer released to you,

Now to the King Eternal the immortal, invisible, and only God be honor and glory forever and ever! Amen.

He alone has endless life and lives in inaccessible light. No one has ever seen him, nor can anyone see him. Honor and eternal power belong to him! Amen.

And, "In the beginning, Lord, you laid the foundation of the earth, and the heavens are the work of your hands.

You have forgotten the encouragement that is addressed to you as sons: "My son, do not think lightly of the Lord's discipline or give up when you are corrected by him.

Jesus, the Messiah, is the same yesterday and today and forever!

"I am the Alpha and the Omega," declares the Lord God, "the one who is, who was, and who is coming, the Almighty."

saying, "Write on a scroll what you see, and send it to the seven churches: Ephesus, Smyrna, Pergamum, Thyatira, Sardis, Philadelphia, and Laodicea."