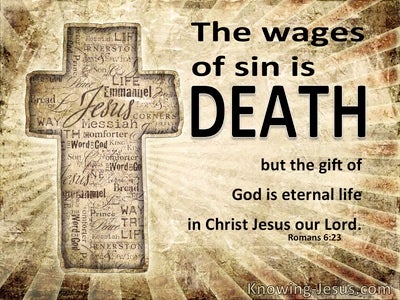 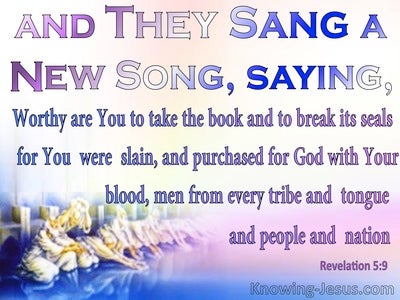 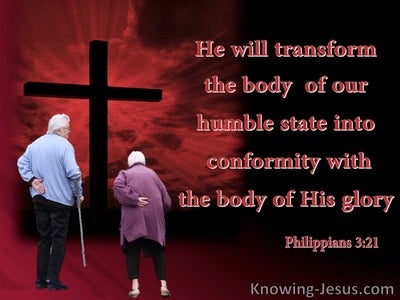 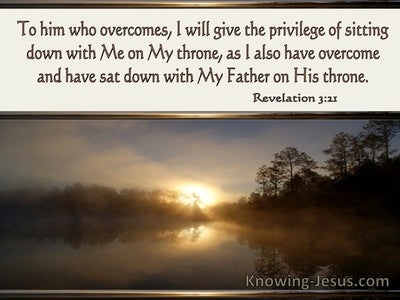 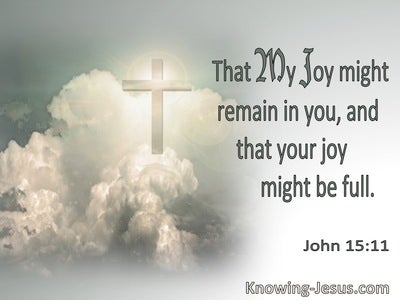 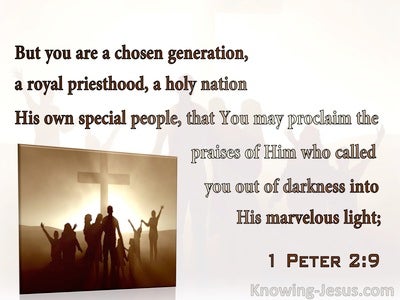 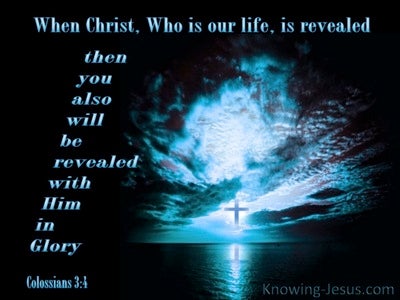 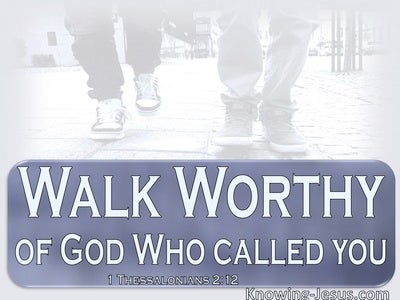 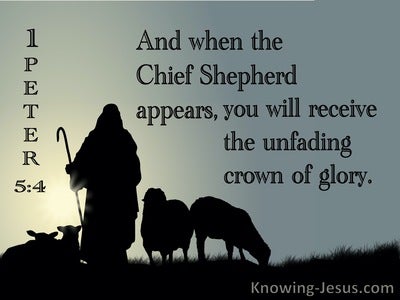 For the wages paid by Sin are death; but God's free gift is the Life of the Ages bestowed upon us in Christ Jesus our Lord.

"Dismiss your fears, little flock: your Father finds a pleasure in giving you the Kingdom.

You however have remained with me amid my trials; and I covenant to give you, as my Father has covenanted to give me, a Kingdom-- so that you shall eat and drink at my table in my Kingdom, and sit on thrones as judges over the twelve tribes of Israel.

In my Father's house there are many resting-places. Were it otherwise, I would have told you; for I am going to make ready a place for you.

For we know that if this poor tent, our earthly house, is taken down, we have in Heaven a building which God has provided, a house not built by human hands, but eternal.

but, as it is, we see them eager for a better land, that is to say, a heavenly one. For this reason God is not ashamed to be called their God, for He has now prepared a city for them.

After this I looked, and a vast host appeared which it was impossible for anyone to count, gathered out of every nation and from all tribes and peoples and languages, standing before the throne and before the Lamb, clothed in long white robes, and carrying palm-branches in their hands. In loud voices they were exclaiming, "It is to our God who is seated on the throne, and to the Lamb, that we owe our salvation!"

And I tell you that many will come from the east and from the west and will recline at table with Abraham, Isaac and Jacob in the Kingdom of the Heavens,

They will come from east and west, from north and south, and will sit down at the banquet in the Kingdom of God.

And now they sing a new song. "It is fitting," they say, "that Thou shouldst be the One to take the book And break its seals; Because Thou hast been offered in sacrifice, And hast purchased for God with Thine own blood Some out of every tribe and language and people and nation,

"My lord, you know," I replied. "They are those," he said, "who have just passed through the great distress, and have washed their robes and made them white in the blood of the Lamb.

knowing, as you do, that it was not with a ransom of perishable wealth, such as silver or gold, that you were set free from your frivolous habits of life which had been handed down to you from your forefathers, but with the precious blood of Christ--as of an unblemished and spotless lamb.

Blessed are those who wash their robes clean, that they may have a right to the Tree of Life, and may go through the gates into the city.

"And I tell you that every man who shall have acknowledged me before men, the Son of Man will also acknowledge before the angels of God.

"Not every one who says to me, 'Master, Master,' will enter the Kingdom of the Heavens, but only those who are obedient to my Father who is in Heaven. Many will say to me on that day, "'Master, Master, have we not prophesied in Thy name, and in Thy name expelled demons, and in Thy name performed many mighty works?' "And then I will tell them plainly, "'I never knew you: begone from me, you doers of wickedness.'

And all of us, with unveiled faces, reflecting like bright mirrors the glory of the Lord, are being transformed into the same likeness, from one degree of radiant holiness to another, even as derived from the Lord the Spirit.

who, in the exercise of the power which He has even to subject all things to Himself, will transform this body of our humiliation until it resembles His own glorious body.

It is by means of these that He has granted us His precious and wondrous promises, in order that through them you may, one and all, become sharers in the very nature of God, having completely escaped the corruption which exists in the world through earthly cravings.

"'Let all who have ears give heed to what the Spirit is saying to the Churches. To him who overcomes I will give the privilege of eating the fruit of the Tree of Life, which is in the Paradise of God.'

"'To him who overcomes I will give the privilege of sitting down with Me on My throne, as I also have overcome and have sat down with My Father on His throne.

Then they heard a loud voice calling to them out of Heaven, and bidding them come up; and they went up to Heaven in the cloud, and their enemies saw them go.

and every one who is living and is a believer in me shall never, never die. Do you believe this?"

For the Lord Himself will come down from Heaven with a loud word of command, and with an archangel's voice and the trumpet of God, and the dead in Christ will rise first. Afterwards we who are alive and are still on earth will be caught up in their company amid clouds to meet the Lord in the air.

And I heard a loud voice, which came from the throne, say, "God's dwelling place is among men and He will dwell among them and they shall be His peoples. Yes, God Himself will be among them.

"Blessed are the pure in heart, for they shall see God.

Afterwards we who are alive and are still on earth will be caught up in their company amid clouds to meet the Lord in the air.

and His name will be on their foreheads.

"'You have done well, good and trustworthy servant,' replied his master; 'you have been trustworthy in the management of a little, I will put you in charge of much: share your master's joy.'

I tell you that in the same way there will be rejoicing in Heaven over one repentant sinner--more rejoicing than over ninety-nine blameless persons who have no need of repentance.

"These things I have spoken to you in order that I may have joy in you, and that your joy may become perfect.

For what is our hope or joy, or the crown of which we boast? Is it not you yourselves in the presence of our Lord Jesus at His Coming? Yes, you are our glory and our joy.

simply fixing our gaze upon Jesus, our Prince Leader in the faith, who will also award us the prize. He, for the sake of the joy which lay before Him, patiently endured the cross, looking with contempt upon its shame, and afterwards seated Himself-- where He still sits--at the right hand of the throne of God.

For these are a plain token of God's righteous judgement, which has in view your being deemed worthy of admission to God's Kingdom, for the sake of which, indeed, you are sufferers. A plain token of God's righteous judgement, I say, since it is a righteous thing for Him to requite with affliction those who are now afflicting you; and to requite with rest you who are suffering affliction now--rest with us at the re-appearing of the Lord Jesus from Heaven, attended by His mighty angels.

We who have believed are soon to be admitted to the true rest; as He has said, "As I swore in My anger, they shall not be admitted to My rest," although God's works had been going on ever since the creation of the world.

And I heard a voice speaking from Heaven. It said, "Write as follows: "'Blessed are the dead who die in the Lord from this time onward. Yes, says the Spirit, let them rest from their sorrowful labours; for what they have done goes with them.'"

For in the Resurrection, men neither marry nor are women given in marriage, but they are like angels in Heaven.

For when they have risen from among the dead, men do not marry and women are not given in marriage, but they are as angels are in Heaven.

But as for those who shall have been deemed worthy to find a place in that other age and in the Resurrection from among the dead, the men do not marry and the women are not given in marriage. For indeed they cannot die again; they are like angels, and are sons of God through being sons of the Resurrection.

Nor has the city any need of the sun or of the moon, to give it light; for the glory of God has shone upon it and its lamp is the Lamb.

Then will the righteous shine out like the sun in their Father's Kingdom. Listen, every one who has ears!

When Christ appears--He is our true Life--then you also will appear with Him in glory.

and imploring you to live lives worthy of fellowship with God who is inviting you to share His own Kingship and glory.

And then, when the chief Shepherd appears, you will receive the never-withering wreath of glory.

Why, what we now suffer I count as nothing in comparison with the glory which is soon to be manifested in us.

So I exhort the Elders among you--I who am their fellow Elder and have been an eye-witness of the sufferings of the Christ, and am also a sharer in the glory which is soon to be revealed.