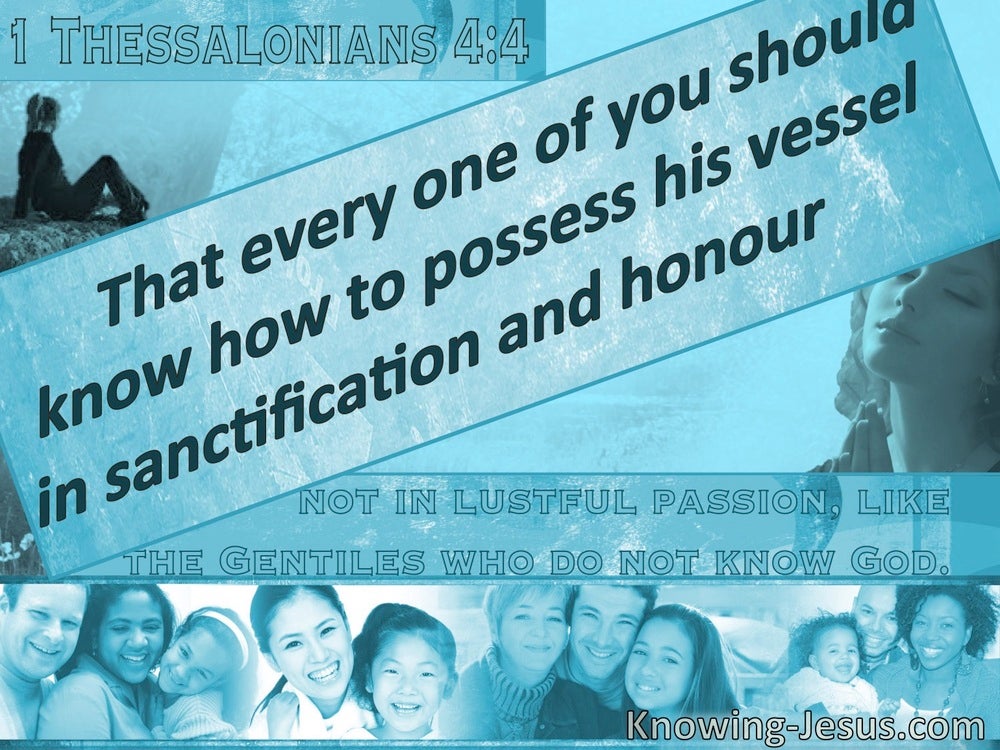 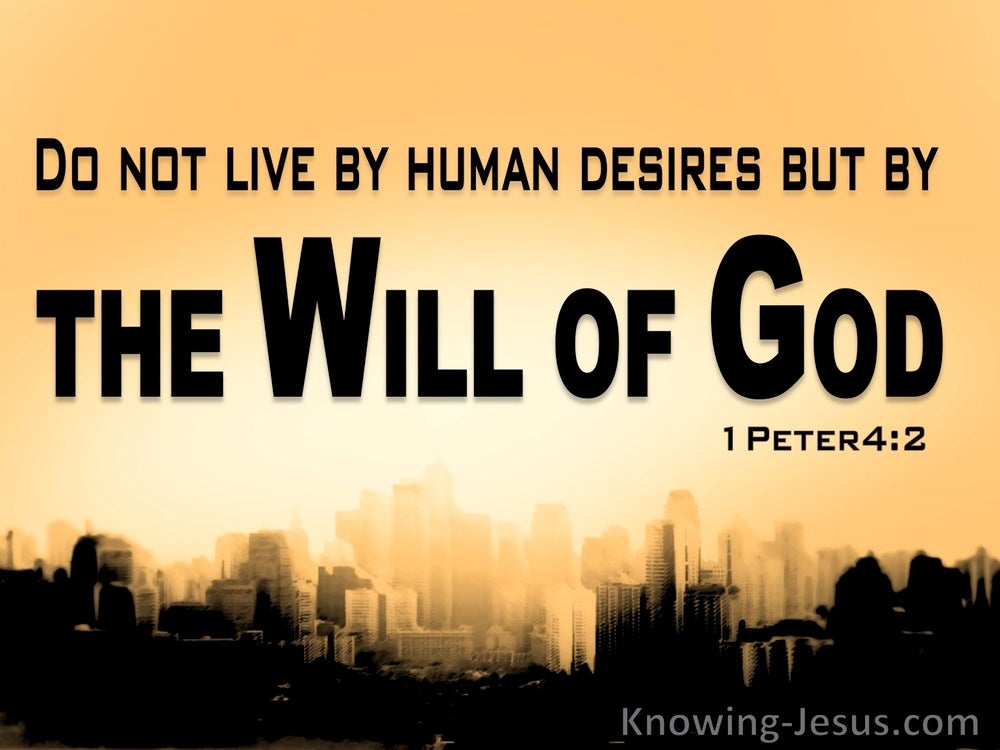 that each of you know how to possess his own vessel in sanctification and honor,

Food is for the stomach and the stomach is for food, but God will do away with both of them. Yet the body is not for immorality, but for the Lord, and the Lord is for the body.

so as to live the rest of the time in the flesh no longer for the lusts of men, but for the will of God.

Or do you not know that the unrighteous will not inherit the kingdom of God? Do not be deceived; neither fornicators, nor idolaters, nor adulterers, nor effeminate, nor homosexuals,

I am afraid that when I come again my God may humiliate me before you, and I may mourn over many of those who have sinned in the past and not repented of the impurity, immorality and sensuality which they have practiced.

Keep your way far from her
And do not go near the door of her house,

For from within, out of the heart of men, proceed the evil thoughts, fornications, thefts, murders, adulteries,

Now the deeds of the flesh are evident, which are: immorality, impurity, sensuality,

Now when evening came David arose from his bed and walked around on the roof of the king's house, and from the roof he saw a woman bathing; and the woman was very beautiful in appearance. So David sent and inquired about the woman. And one said, "Is this not Bathsheba, the daughter of Eliam, the wife of Uriah the Hittite?" David sent messengers and took her, and when she came to him, he lay with her; and when she had purified herself from her uncleanness, she returned to her house. read more.
The woman conceived; and she sent and told David, and said, "I am pregnant." Then David sent to Joab, saying, "Send me Uriah the Hittite." So Joab sent Uriah to David. When Uriah came to him, David asked concerning the welfare of Joab and the people and the state of the war. Then David said to Uriah, "Go down to your house, and wash your feet." And Uriah went out of the king's house, and a present from the king was sent out after him. But Uriah slept at the door of the king's house with all the servants of his lord, and did not go down to his house. Now when they told David, saying, "Uriah did not go down to his house," David said to Uriah, "Have you not come from a journey? Why did you not go down to your house?" Uriah said to David, "The ark and Israel and Judah are staying in temporary shelters, and my lord Joab and the servants of my lord are camping in the open field. Shall I then go to my house to eat and to drink and to lie with my wife? By your life and the life of your soul, I will not do this thing." Then David said to Uriah, "Stay here today also, and tomorrow I will let you go." So Uriah remained in Jerusalem that day and the next. Now David called him, and he ate and drank before him, and he made him drunk; and in the evening he went out to lie on his bed with his lord's servants, but he did not go down to his house. Now in the morning David wrote a letter to Joab and sent it by the hand of Uriah. He had written in the letter, saying, "Place Uriah in the front line of the fiercest battle and withdraw from him, so that he may be struck down and die." So it was as Joab kept watch on the city, that he put Uriah at the place where he knew there were valiant men. The men of the city went out and fought against Joab, and some of the people among David's servants fell; and Uriah the Hittite also died. Then Joab sent and reported to David all the events of the war. He charged the messenger, saying, "When you have finished telling all the events of the war to the king, and if it happens that the king's wrath rises and he says to you, 'Why did you go so near to the city to fight? Did you not know that they would shoot from the wall? 'Who struck down Abimelech the son of Jerubbesheth? Did not a woman throw an upper millstone on him from the wall so that he died at Thebez? Why did you go so near the wall?'--then you shall say, 'Your servant Uriah the Hittite is dead also.'" So the messenger departed and came and reported to David all that Joab had sent him to tell. The messenger said to David, "The men prevailed against us and came out against us in the field, but we pressed them as far as the entrance of the gate. "Moreover, the archers shot at your servants from the wall; so some of the king's servants are dead, and your servant Uriah the Hittite is also dead." Then David said to the messenger, "Thus you shall say to Joab, 'Do not let this thing displease you, for the sword devours one as well as another; make your battle against the city stronger and overthrow it'; and so encourage him." Now when the wife of Uriah heard that Uriah her husband was dead, she mourned for her husband. When the time of mourning was over, David sent and brought her to his house and she became his wife; then she bore him a son But the thing that David had done was evil in the sight of the LORD.

Let the king appoint overseers in

Rehoboam loved Maacah the daughter of Absalom more than all his other wives and concubines. For he had taken eighteen wives and sixty concubines and fathered twenty-eight sons and sixty daughters. Rehoboam appointed Abijah the son of Maacah as head and leader among his brothers, for he intended to make him king. He acted wisely and distributed some of his sons through all the territories of Judah and Benjamin to all the fortified cities, and he gave them food in abundance. And he sought many wives for them.

Lasciviousness » Instances of » The gibeahites

While they were celebrating, behold, the men of the city, certain worthless fellows, surrounded the house, pounding the door; and they spoke to the owner of the house, the old man, saying, "Bring out the man who came into your house that we may have relations with him." Then the man, the owner of the house, went out to them and said to them, "No, my fellows, please do not act so wickedly; since this man has come into my house, do not commit this act of folly. "Here is my virgin daughter and his concubine. Please let me bring them out that you may ravish them and do to them whatever you wish. But do not commit such an act of folly against this man." read more.
But the men would not listen to him. So the man seized his concubine and brought her out to them; and they raped her and abused her all night until morning, then let her go at the approach of dawn.

Now it was after this that Absalom the son of David had a beautiful sister whose name was Tamar, and Amnon the son of David loved her. Amnon was so frustrated because of his sister Tamar that he made himself ill, for she was a virgin, and it seemed hard to Amnon to do anything to her. But Amnon had a friend whose name was Jonadab, the son of Shimeah, David's brother; and Jonadab was a very shrewd man. read more.
He said to him, "O son of the king, why are you so depressed morning after morning? Will you not tell me?" Then Amnon said to him, "I am in love with Tamar, the sister of my brother Absalom." Jonadab then said to him, "Lie down on your bed and pretend to be ill; when your father comes to see you, say to him, 'Please let my sister Tamar come and give me some food to eat, and let her prepare the food in my sight, that I may see it and eat from her hand.'" So Amnon lay down and pretended to be ill; when the king came to see him, Amnon said to the king, "Please let my sister Tamar come and make me a couple of cakes in my sight, that I may eat from her hand." Then David sent to the house for Tamar, saying, "Go now to your brother Amnon's house, and prepare food for him." So Tamar went to her brother Amnon's house, and he was lying down. And she took dough, kneaded it, made cakes in his sight, and baked the cakes. She took the pan and dished them out before him, but he refused to eat. And Amnon said, "Have everyone go out from me." So everyone went out from him. Then Amnon said to Tamar, "Bring the food into the bedroom, that I may eat from your hand." So Tamar took the cakes which she had made and brought them into the bedroom to her brother Amnon. When she brought them to him to eat, he took hold of her and said to her, "Come, lie with me, my sister." But she answered him, "No, my brother, do not violate me, for such a thing is not done in Israel; do not do this disgraceful thing! "As for me, where could I get rid of my reproach? And as for you, you will be like one of the fools in Israel. Now therefore, please speak to the king, for he will not withhold me from you." However, he would not listen to her; since he was stronger than she, he violated her and lay with her.

When Judah saw her, he thought she was a harlot, for she had covered her face. So he turned aside to her by the road, and said, "Here now, let me come in to you"; for he did not know that she was his daughter-in-law. And she said, "What will you give me, that you may come in to me?"

Now King Solomon loved many foreign women along with the daughter of Pharaoh: Moabite, Ammonite, Edomite, Sidonian, and Hittite women, from the nations concerning which the LORD had said to the sons of Israel, "You shall not associate with them, nor shall they associate with you, for they will surely turn your heart away after their gods." Solomon held fast to these in love. He had seven hundred wives, princesses, and three hundred concubines, and his wives turned his heart away.

Now Eli was very old; and he heard

and they called to Lot and said to him, “