40 Bible Verses about Moses, Significance Of 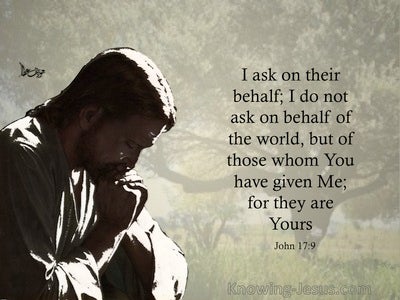 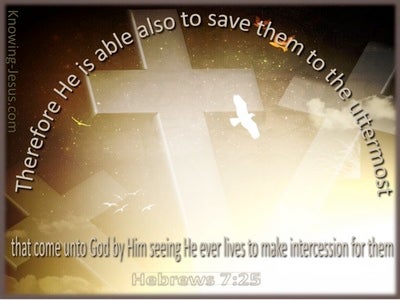 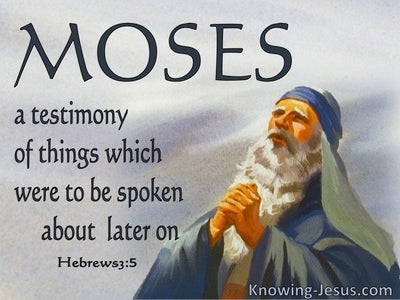 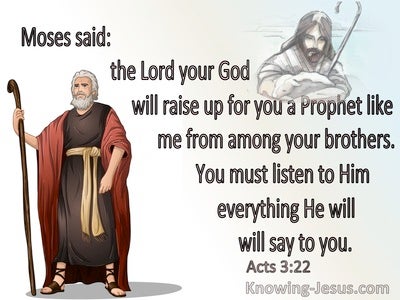 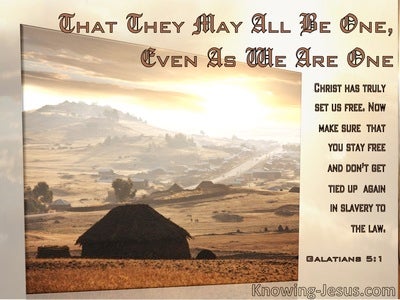 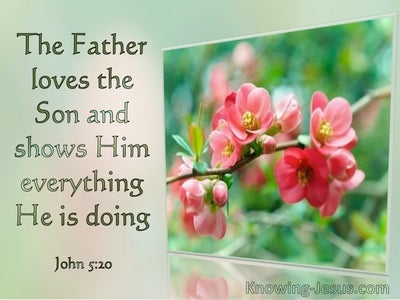 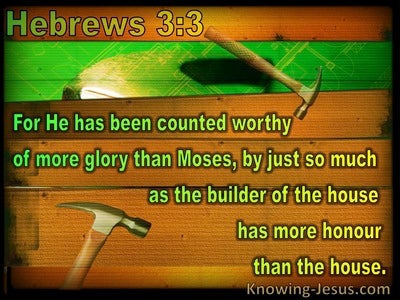 Matthew 23:10
Verse Concepts
Examples of LeadershipLeadersServant LeadershipNot Being Alone
ClaimsTeachersJesus Claims To Be The Christ

And do not accept the name of 'leader,' for your Leader is one alone--the Christ.

Then Jesus turned round, and seeing them following He asked them, "What is your wish?" "Rabbi," they replied--'Rabbi' means 'Teacher' --"where are you staying?"

John 17:9
Verse Concepts
Jesus PrayingPeople Belong To God
God Giving To The SonPraying For Others

"I am making request for them: for the world I do not make any request, but for those whom Thou hast given me. Because they are Thine,

Hence too He is able to save to the uttermost those who come to God through Him, seeing that He ever lives to plead for them.

The God of Abraham, Isaac, and Jacob, the God of our forefathers, has conferred this honour on His Servant Jesus, whom you delivered up and disowned in the presence of Pilate, when he had decided to let Him go.

Moreover, Moses was faithful in all God's house as a servant in delivering the message given him to speak;

And they were singing the song of Moses, God's servant, and the song of the Lamb. Their words were, "Great and wonderful are Thy works, O Lord God, the Ruler of all. Righteous and true are Thy ways, O King of the nations.

Moses declared, "'The Lord your God will raise up a Prophet for you from among your brethren as He has raised me. In all that He says to you, you must listen to Him.

"The Moses whom they rejected, asking him, 'Who appointed you magistrate and judge?' --that same Moses we find God sending as a magistrate and a deliverer by the help of the angel who appeared to him in the bush.

Christ having made us gloriously free--stand fast and do not again be hampered with the yoke of slavery.

Then Philip found Nathanael, and said to him, "We have found him about whom Moses in the Law wrote, as well as the Prophets--Jesus, the son of Joseph, a man of Nazareth."

For if you believe Moses, you would believe me; for he wrote about me.

"I am the Good Shepherd. A good shepherd lays down his very life for the sheep.

He was still speaking when a luminous cloud spread over them; and a voice was heard from within the cloud, which said, "This is My Son dearly beloved, in whom is My delight. Listen to Him."

For the Father loves the Son and reveals to Him all that He Himself is doing. And greater deeds than these will He reveal to Him, in order that you may wonder.

Why then was the Law given? It was imposed later on for the sake of defining sin, until the seed should come to whom God had made the promise; and its details were laid down by a mediator with the help of angels.

And because of this He is the negotiator of a new Covenant, in order that, since a life has been given in atonement for the offences committed under the first Covenant, those who have been called may receive the eternal inheritance which has been promised to them.

and to Jesus the negotiator of a new Covenant, and to the sprinkled blood which speaks in more gracious tones than that of Abel.

Through faith Moses, when he grew to manhood, refused to be known as Pharaoh's daughter's son, having determined to endure ill-treatment along with the people of God rather than enjoy the short-lived pleasures of sin; because he deemed the reproaches which he might meet with in the service of the Christ to be greater riches than all the treasures of Egypt; for he fixed his gaze on the coming reward.read more.
Through faith he left Egypt, not being frightened by the king's anger; for he held on his course as seeing the unseen One. Through faith he instituted the Passover, and the sprinkling with blood so that the destroyer of the firstborn might not touch the Israelites.

"Do not for a moment suppose that I have come to abrogate the Law or the Prophets: I have not come to abrogate them but to give them their completion. Solemnly I tell you that until Heaven and earth pass away, not one iota or smallest detail will pass away from the Law until all has taken place. Whoever therefore breaks one of these least commandments and teaches others to break them, will be called the least in the Kingdom of the Heavens; but whoever practises them and teaches them, he will be acknowledged as great in the Kingdom of the Heavens.

"Why do you ask me," He replied, "about what is good? There is only One who is truly good. But if you desire to enter into Life, keep the Commandments."

Acts 7:38
Verse Concepts
Angels Giving The LawThe Law Given Through MosesAngels as God's servantsAngels As Mediators
Angels, Important EventsLawgiversIsrael In The Wilderness

This is he who was among the Congregation in the Desert, together with the angel who spoke to him on Mount Sinai and with our forefathers, who received ever-living utterances to hand on to us.

Then Jesus entered the Temple and proceeded to drive out the dealers. "It is written," He said, "'And My house shall be the House of Prayer,' but you have made it a robbers' cave."

This, the first of His miracles, Jesus performed at Cana in Galilee, and thus displayed His glorious power; and His disciples believed in Him.

"Do not suppose that I will accuse you to the Father. There is one who accuses you, namely Moses, on whom your hope rests.

For in the Law of Moses it is written, "Thou shalt not muzzle an ox while it is treading out the grain."

The next day John saw Jesus coming towards him and exclaimed, "Look, that is the Lamb of God who is to take away the sin of the world!

for this is my blood which is to be poured out for many for the remission of sins--the blood which ratifies the Covenant.

For if the blood of goats and bulls and the ashes of a heifer sprinkling those who have contracted defilement make them holy so as to bring about ceremonial purity, how much more certainly shall the blood of Christ, who strengthened by the eternal Spirit offered Himself to God, free from blemish, purify your consciences from lifeless works for you to serve the ever-living God?

Through faith he instituted the Passover, and the sprinkling with blood so that the destroyer of the firstborn might not touch the Israelites.

He it is whom God put forward as a Mercy-seat, rendered efficacious through faith in His blood, in order to demonstrate His righteousness-- because of the passing over, in God's forbearance, of the sins previously committed--

There in their presence His form underwent a change; His face shone like the sun, and His raiment became as white as the light.

If, however, the service that proclaims death--its code being engraved in writing upon stones--came with glory, so that the children of Israel could not look steadily on the face of Moses because of the brightness of his face--a vanishing brightness;

And they were singing the song of Moses, God's servant, and the song of the Lamb. Their words were, "Great and wonderful are Thy works, O Lord God, the Ruler of all. Righteous and true are Thy ways, O King of the nations. Who shall not be afraid, O Lord, and glorify Thy name? For Thou alone art holy. All nations shall come and shall worship Thee, because the righteousness of all that Thou hast done has been made manifest."

Moreover there appeared to them Elijah accompanied by Moses; and the two were conversing with Jesus,

And suddenly Moses and Elijah appeared to them conversing with Him.

And suddenly there were two men conversing with Him, who were Moses and Elijah.

For Jesus has been counted worthy of greater glory than Moses, in so far as he who has built a house has higher honour than the house itself.