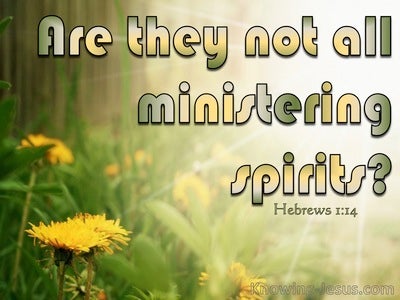 And of the angels He says,
“Who makes His angels winds,
And His ministers a flame of fire.”

He makes the winds His messengers,
Flaming fire His ministers.

Daniel 10:13
Verse Concepts
Principalities And PowersSpiritual WarfaregabrielSatan, Agents OfSatan, As The Enemy Of God
Angels opposed to GodTen Or More DaysMichael The ArchangelPrincesRanks Of Angels

But the prince of the kingdom of Persia was withstanding me for twenty-one days; then behold, Michael, one of the chief princes, came to help me, for I had been left there with the kings of Persia.

And I heard the voice of a man between the banks of Ulai, and he called out and said, “Gabriel, give this man an understanding of the vision.”

The angel answered and said to him, “I am Gabriel, who stands in the presence of God, and I have been sent to speak to you and to bring you this good news.

Are they not all ministering spirits, sent out to render service for the sake of those who will inherit salvation?

Exodus 23:23
Verse Concepts
God Will Kill The PeoplesJerusalem, History Of
God KillingAngel of the Lord

For My angel will go before you and bring you in to the land of the Amorites, the Hittites, the Perizzites, the Canaanites, the Hivites and the Jebusites; and I will completely destroy them.

But when we cried out to the Lord, He heard our voice and sent an angel and brought us out from Egypt; now behold, we are at Kadesh, a town on the edge of your territory.

For He said, “Surely, they are My people,
Sons who will not deal falsely.”
So He became their Savior.
In all their affliction He was afflicted,
And the angel of His presence saved them;
In His love and in His mercy He redeemed them,
And He lifted them and carried them all the days of old.

But during the night an angel of the Lord opened the gates of the prison, and taking them out he said,

you who received the law as ordained by angels, and yet did not keep it.”

“Then his soul draws near to the pit,
And his life to those who bring death.
“If there is an angel as mediator for him,
One out of a thousand,
To remind a man what is right for him,
Then let him be gracious to him, and say,
‘Deliver him from going down to the pit,
I have found a ransom’;
read more.
Let his flesh become fresher than in youth,
Let him return to the days of his youthful vigor;
Then he will pray to God, and He will accept him,
That he may see His face with joy,
And He may restore His righteousness to man.

This is the one who was in the congregation in the wilderness together with the angel who was speaking to him on Mount Sinai, and who was with our fathers; and he received living oracles to pass on to you.

Hebrews 2:2
Verse Concepts
Angels Giving The LawGod Has RequitedDisobedience, To God
Angels Activities Among BelieversThe Recompense Of The WickedAngels As Mediators

For if the word spoken through angels proved unalterable, and every transgression and disobedience received a just penalty,

I saw at night, and behold, a man was riding on a red horse, and he was standing among the myrtle trees which were in the ravine, with red, sorrel and white horses behind him. Then I said, “My lord, what are these?” And the angel who was speaking with me said to me, “I will show you what these are.” And the man who was standing among the myrtle trees answered and said, “These are those whom the Lord has sent to patrol the earth.”

“As for me, Daniel, my spirit was distressed within me, and the visions in my mind kept alarming me. I approached one of those who were standing by and began asking him the exact meaning of all this. So he told me and made known to me the interpretation of these things:

Then I said to him, “What are these two olive trees on the right of the lampstand and on its left?” And I answered the second time and said to him, “What are the two olive branches which are beside the two golden pipes, which empty the golden oil from themselves?” So he answered me, saying, “Do you not know what these are?” And I said, “No, my lord.”read more.
Then he said, “These are the two anointed ones who are standing by the Lord of the whole earth.”

Then one of the seven angels who had the seven bowls came and spoke with me, saying, “Come here, I will show you the judgment of the great harlot who sits on many waters,

He spoke and said to those who were standing before him, saying, “Remove the filthy garments from him.” Again he said to him, “See, I have taken your iniquity away from you and will clothe you with festal robes.”