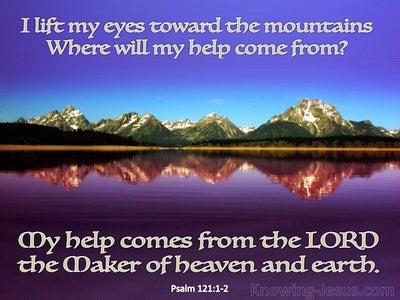 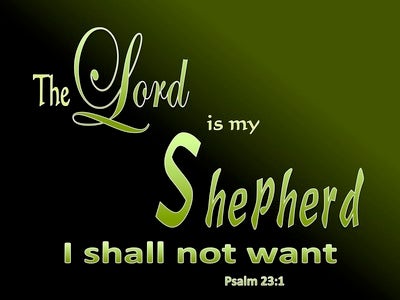 A Song of Ascents.
I will lift up my eyes to the mountains;
From where shall my help come?
My help comes from the Lord,
Who made heaven and earth.
He will not allow your foot to slip;
He who keeps you will not slumber.
read more.
Behold, He who keeps Israel
Will neither slumber nor sleep.
The Lord is your keeper;
The Lord is your shade on your right hand.
The sun will not smite you by day,
Nor the moon by night.
The Lord will protect you from all evil;
He will keep your soul.
The Lord will guard your going out and your coming in
From this time forth and forever.

Go and gather the elders of Israel together and say to them, ‘The Lord, the God of your fathers, the God of Abraham, Isaac and Jacob, has appeared to me, saying, “I am indeed concerned about you and what has been done to you in Egypt.

“For the Lord’s portion is His people;
Jacob is the allotment of His inheritance.
“He found him in a desert land,
And in the howling waste of a wilderness;
He encircled him, He cared for him,
He guarded him as the pupil of His eye.

But the eye of their God was on the elders of the Jews, and they did not stop them until a report could come to Darius, and then a written reply be returned concerning it.

The Lord is in His holy temple; the Lord’s throne is in heaven;
His eyes behold, His eyelids test the sons of men.
The Lord tests the righteous and the wicked,
And the one who loves violence His soul hates.

Therefore, let everyone who is godly pray to You in a time when You may be found;
Surely in a flood of great waters they will not reach him.

The king is not saved by a mighty army;
A warrior is not delivered by great strength.
A horse is a false hope for victory;
Nor does it deliver anyone by its great strength.
Behold, the eye of the Lord is on those who fear Him,
On those who hope for His lovingkindness,

The angel of the Lord encamps around those who fear Him,
And rescues them.

The Lord keeps all who love Him,
But all the wicked He will destroy.

But I will camp around My house because of an army,
Because of him who passes by and returns;
And no oppressor will pass over them anymore,
For now I have seen with My eyes.

Are not two sparrows sold for a cent? And yet not one of them will fall to the ground apart from your Father. But the very hairs of your head are all numbered. So do not fear; you are more valuable than many sparrows.

“Truly, truly, I say to you, he who does not enter by the door into the fold of the sheep, but climbs up some other way, he is a thief and a robber. But he who enters by the door is a shepherd of the sheep. To him the doorkeeper opens, and the sheep hear his voice, and he calls his own sheep by name and leads them out.read more.
When he puts forth all his own, he goes ahead of them, and the sheep follow him because they know his voice. A stranger they simply will not follow, but will flee from him, because they do not know the voice of strangers.” This figure of speech Jesus spoke to them, but they did not understand what those things were which He had been saying to them. So Jesus said to them again, “Truly, truly, I say to you, I am the door of the sheep. All who came before Me are thieves and robbers, but the sheep did not hear them. I am the door; if anyone enters through Me, he will be saved, and will go in and out and find pasture.

For this reason I also suffer these things, but I am not ashamed; for I know whom I have believed and I am convinced that He is able to guard what I have entrusted to Him until that day.

The Lord protects the strangers;
He supports the fatherless and the widow,
But He thwarts the way of the wicked.

Behold, I am with you and will keep you wherever you go, and will bring you back to this land; for I will not leave you until I have done what I have promised you.”

For the eyes of the Lord move to and fro throughout the earth that He may strongly support those whose heart is completely His. You have acted foolishly in this. Indeed, from now on you will surely have wars.”

‘You have granted me life and lovingkindness;
And Your care has preserved my spirit.

“Oh that I were as in months gone by,
As in the days when God watched over me;

For I will set My eyes on them for good, and I will bring them again to this land; and I will build them up and not overthrow them, and I will plant them and not pluck them up.

As I have watched over them to pluck up, to break down, to overthrow, to destroy and to bring disaster, so I will watch over them to build and to plant,” declares the Lord.

O my God, incline Your ear and hear! Open Your eyes and see our desolations and the city which is called by Your name; for we are not presenting our supplications before You on account of any merits of our own, but on account of Your great compassion.

A Psalm of David.
The Lord is my shepherd,
I shall not want.

Save Your people and bless Your inheritance;
Be their shepherd also, and carry them forever.

Matthew 2:6
Verse Concepts
Christ Is King Of IsraelUnimportant ThingsGod, As Shepherd
RulersNames And Titles For Christ

‘And you, Bethlehem, land of Judah,
Are by no means least among the leaders of Judah;
For out of you shall come forth a Ruler
Who will shepherd My people Israel.’”

The eyes of the Lord are toward the righteous
And His ears are open to their cry.

that Your eye may be open toward this house day and night, toward the place of which You have said that You would put Your name there, to listen to the prayer which Your servant shall pray toward this place.

The Lord said to him, “I have heard your prayer and your supplication, which you have made before Me; I have consecrated this house which you have built by putting My name there forever, and My eyes and My heart will be there perpetually.

For now I have chosen and consecrated this house that My name may be there forever, and My eyes and My heart will be there perpetually.

Since the day that your fathers came out of the land of Egypt until this day, I have sent you all My servants the prophets, daily rising early and sending them. Yet they did not listen to Me or incline their ear, but stiffened their neck; they did more evil than their fathers.

And now, because you have done all these things,” declares the Lord, “and I spoke to you, rising up early and speaking, but you did not hear, and I called you but you did not answer,

Jeremiah 11:7
Verse Concepts
Pay Attention To God!God Bringing Israel Out Of Egypt
Those Who Rose Early

For I solemnly warned your fathers in the day that I brought them up from the land of Egypt, even to this day, warning persistently, saying, “Listen to My voice.”

And the Lord has sent to you all His servants the prophets again and again, but you have not listened nor inclined your ear to hear,

“And You save an afflicted people;
But Your eyes are on the haughty whom You abase.

“Behold, I am going to send for many fishermen,” declares the Lord, “and they will fish for them; and afterwards I will send for many hunters, and they will hunt them from every mountain and every hill and from the clefts of the rocks. For My eyes are on all their ways; they are not hidden from My face, nor is their iniquity concealed from My eyes.

For you were continually straying like sheep, but now you have returned to the Shepherd and Guardian of your souls.

So he said,
“I saw all Israel
Scattered on the mountains,
Like sheep which have no shepherd;
And the Lord said,
‘These have no master.
Let each of them return to his house in peace.’”

And it will be that like a hunted gazelle,
Or like sheep with none to gather them,
They will each turn to his own people,
And each one flee to his own land.

For thus says the Lord God, “Behold, I Myself will search for My sheep and seek them out. As a shepherd cares for his herd in the day when he is among his scattered sheep, so I will care for My sheep and will deliver them from all the places to which they were scattered on a cloudy and gloomy day.