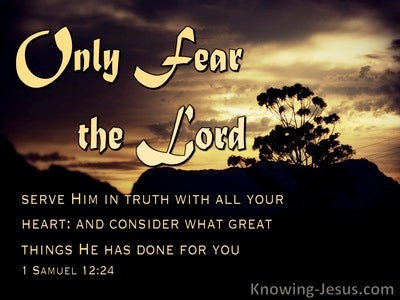 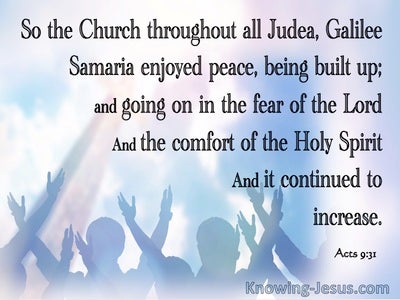 However, fear the Lord and serve him faithfully with all your heart. Just look at the great things he has done for you!

Now obey the Lord and worship him with integrity and loyalty. Put aside the gods your ancestors worshiped beyond the Euphrates and in Egypt and worship the Lord.

"Dominion and awesome might belong to God; he establishes peace in his heights.

As for the Almighty, we cannot attain to him! He is great in power, but justice and abundant righteousness he does not oppress. Therefore people fear him, for he does not regard all the wise in heart."

"My covenant with him was designed to bring life and peace. I gave its statutes to him to fill him with awe, and he indeed revered me and stood in awe before me.

You must revere the Lord your God, serve him, and take oaths using only his name. You must not go after other gods, those of the surrounding peoples,

Revere the Lord your God, serve him, be loyal to him and take oaths only in his name. He is the one you should praise; he is your God, the one who has done these great and awesome things for you that you have seen.

So Samuel called to the Lord, and the Lord made it thunder and rain that day. All the people were very afraid of both the Lord and Samuel.

1 Chronicles 16:25
Verse Concepts
Above All GodsPraisePraise, Reasons For
Worship, Of God AloneWorthinessGod, Greatness Of

For the Lord is great and certainly worthy of praise, he is more awesome than all gods.

Let the whole earth fear the Lord! Let all who live in the world stand in awe of him! For he spoke, and it came into existence, he issued the decree, and it stood firm.

"You should fear me!" says the Lord. "You should tremble in awe before me! I made the sand to be a boundary for the sea, a permanent barrier that it can never cross. Its waves may roll, but they can never prevail. They may roar, but they can never cross beyond that boundary." But these people have stubborn and rebellious hearts. They have turned aside and gone their own way. They do not say to themselves, "Let us revere the Lord our God. It is he who gives us the autumn rains and the spring rains at the proper time. It is he who assures us of the regular weeks of harvest."

Lord, I have heard the report of what you did; I am awed, Lord, by what you accomplished. In our time repeat those deeds; in our time reveal them again. But when you cause turmoil, remember to show us mercy!

Now to the eternal king, immortal, invisible, the only God, be honor and glory forever and ever! Amen.

He alone possesses immortality and lives in unapproachable light, whom no human has ever seen or is able to see. To him be honor and eternal power! Amen.

But for you who respect my name, the sun of vindication will rise with healing wings, and you will skip about like calves released from the stall.

In the west, people respect the Lord's reputation; in the east they recognize his splendor. For he comes like a rushing stream driven on by wind sent from the Lord.

"There will be harsh condemnation for the hypocrite who has a valuable male animal in his flock but vows and sacrifices something inferior to the Lord. For I am a great king," says the Lord who rules over all, "and my name is awesome among the nations."

Psalm 96:4
Verse Concepts
Praise To God Is FittingGod Is To Be FearedAbove All Gods
God, Greatness OfPraiseWorthiness

For the Lord is great and certainly worthy of praise; he is more awesome than all gods.

Jeremiah 10:7
Verse Concepts
God Is To Be FearedGod Is WorthyroyaltyGod, Sovereignty Of
God, Wisdom OfGod, All knowingNo One Is Like God

Everyone should revere you, O King of all nations, because you deserve to be revered. For there is no one like you among any of the wise people of the nations nor among any of their kings.

Who will not fear you, O Lord, and glorify your name, because you alone are holy? All nations will come and worship before you for your righteous acts have been revealed."

My hand made them; that is how they came to be," says the Lord. I show special favor to the humble and contrite, who respect what I have to say.

You stood before the Lord your God at Horeb and he said to me, "Assemble the people before me so that I can tell them my commands. Then they will learn to revere me all the days they live in the land, and they will instruct their children." You approached and stood at the foot of the mountain, a mountain ablaze to the sky above it and yet dark with a thick cloud.

Everyone who held the words of the God of Israel in awe gathered around me because of the unfaithful acts of the people of the exile. Devastated, I continued to sit there until the evening offering.

Therefore let us enact a covenant with our God to send away all these women and their offspring, in keeping with your counsel, my lord, and that of those who respect the commandments of our God. And let it be done according to the law.

When Israel saw the great power that the Lord had exercised over the Egyptians, they feared the Lord, and they believed in the Lord and in his servant Moses.

and all people will fear. They will proclaim what God has done, and reflect on his deeds.

But as for me, because of your great faithfulness I will enter your house; I will bow down toward your holy temple as I worship you.

But you are willing to forgive, so that you might be honored.

When the crowd saw this, they were afraid and honored God who had given such authority to men.

And immediately the man stood up, took his stretcher, and went out in front of them all. They were all amazed and glorified God, saying, "We have never seen anything like this!"

Then astonishment seized them all, and they glorified God. They were filled with awe, saying, "We have seen incredible things today."

A lion has roared! Who is not afraid? The sovereign Lord has spoken! Who can refuse to prophesy?

The men feared the Lord greatly, and earnestly vowed to offer lavish sacrifices to the Lord.

He declared in a loud voice: "Fear God and give him glory, because the hour of his judgment has arrived, and worship the one who made heaven and earth, the sea and the springs of water!"

You must not go after other gods, those of the surrounding peoples, for the Lord your God, who is present among you, is a jealous God and his anger will erupt against you and remove you from the land.

Serve the Lord in fear! Repent in terror! Give sincere homage! Otherwise he will be angry, and you will die because of your behavior, when his anger quickly ignites. How blessed are all who take shelter in him!

Psalm 76:7
Verse Concepts
God Is To Be FearedGod Has Anger
wrathAnger Of God, Description

You are awesome! Yes, you! Who can withstand your intense anger?

May God bless us! Then all the ends of the earth will give him the honor he deserves.

He has done this so all the nations of the earth might recognize the Lord's power and so you might always obey the Lord your God."

Then listen from your heavenly dwelling place and answer all the prayers of the foreigners. Then all the nations of the earth will acknowledge your reputation, obey you like your people Israel do, and recognize that this temple I built belongs to you.

Then listen from your heavenly dwelling place and answer all the prayers of the foreigners. Then all the nations of the earth will acknowledge your reputation, obey you like your people Israel do, and recognize that this temple I built belongs to you.

All the kingdoms of the surrounding lands were afraid of God when they heard how the Lord had fought against Israel's enemies.

Make vows to the Lord your God and repay them! Let all those who surround him bring tribute to the awesome one! He humbles princes; the kings of the earth regard him as awesome.

The nations will respect the reputation of the Lord, and all the kings of the earth will respect his splendor,

All the nations will hear about all the good things which I will do to them. This city will bring me fame, honor, and praise before them for the joy that I bring it. The nations will tremble in awe at all the peace and prosperity that I will provide for it.'

Moses said to the people, "Do not fear, for God has come to test you, that the fear of him may be before you so that you do not sin."

Then Jacob woke up and thought, "Surely the Lord is in this place, but I did not realize it!" He was afraid and said, "What an awesome place this is! This is nothing else than the house of God! This is the gate of heaven!"

Serve the Lord in fear! Repent in terror!

Then the church throughout Judea, Galilee, and Samaria experienced peace and thus was strengthened. Living in the fear of the Lord and in the encouragement of the Holy Spirit, the church increased in numbers.

"I tell you, my friends, do not be afraid of those who kill the body, and after that have nothing more they can do. But I will warn you whom you should fear: Fear the one who, after the killing, has authority to throw you into hell. Yes, I tell you, fear him!

But in fact, if you happen to suffer for doing what is right, you are blessed. But do not be terrified of them or be shaken. But set Christ apart as Lord in your hearts and always be ready to give an answer to anyone who asks about the hope you possess.