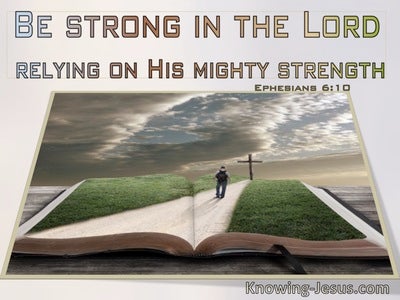 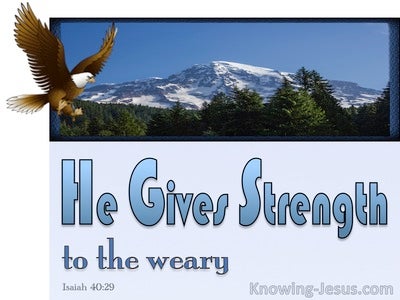 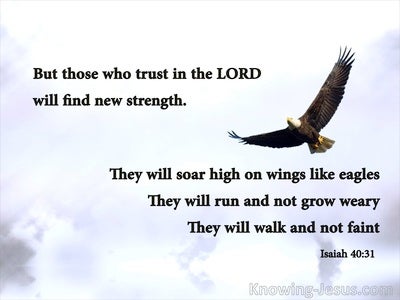 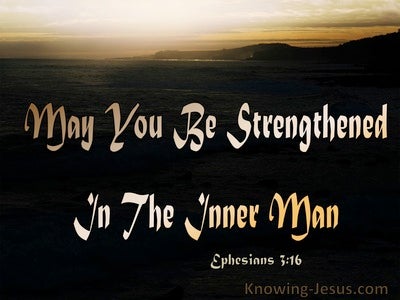 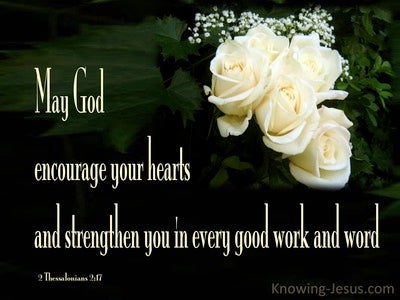 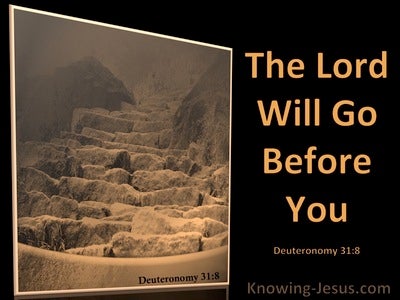 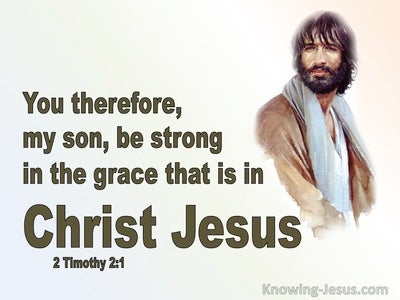 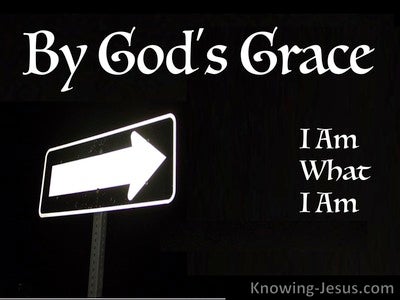 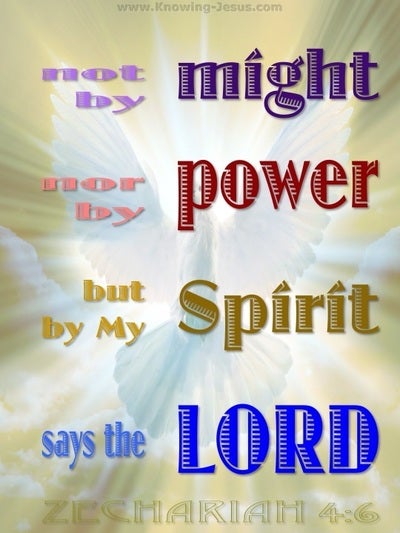 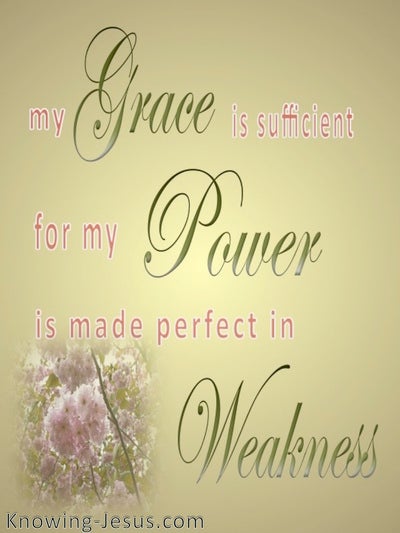 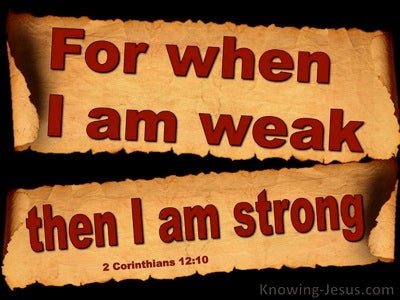 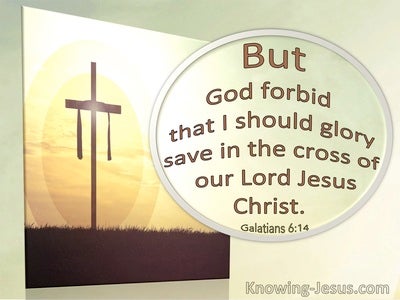 For the rest, be empowering yourselves in the Lord, and in the grasp of his might:

And Samson lay till midnight, and arose at midnight, and took hold of the doors of the gate of the city, and of the two doorposts, and tare them away, with the bar, and put them on his shoulders, - and carried them up to the top of the hill that faceth Hebron.

As for the GOD of Israel, he, is giving strength and abundant might to the people. Blessed be God!

Giving to him that fainteth, strength, And to him that hath no vigour, he causeth, power to abound? Youths both faint and grow weary, And, young warriors - they fall, they fall; But, they who wait for Yahweh, shall renew their strength, They shall mount on strong pinion like eagles, - They shall run and not grew weary, They shall walk and not faint.

And lo! I, am sending forth the promise of my Father upon you; but tarry, ye, in the city, until ye be clothed, from on high, with power.

But ye shall receive power when the Holy Spirit cometh upon you, and ye shall be my witnesses, both in Jerusalem and inall Judaea and Samaria and as far as the uttermost part of the land.

In order that he may give unto you - according to his glorious riches, with power, to be strengthened, through his Spirit, in the inner man,

But may, our Lord Jesus Christ himself, and our God and Father, - Who hath loved you, and given you age-abiding consolation and good hope by favour, Console your hearts, and confirm you in every good work and word!

Grateful, am I unto him that empowered me, Christ Jesus our Lord, in that, faithful, he accounted me, putting me into ministry, -

For God hath not given us a spirit of cowardice, but of power, and love, and correction.

Have I not commanded thee, Be firm and bold, do not start nor be dismayed, - for, with thee, is Yahweh thy God, whithersoever thou goest?

And Moses called for Joshua, and said unto him, in the sight of all Israel. Be firm and bold, for, thou, shalt go with this people into the land which Yahweh sware unto their fathers to give unto them, and, thou shalt cause them to inherit it. But, Yahweh, it is who is going before thee, he will be with thee, he will not fail thee nor forsake thee, - thou must not fear nor be dismayed.

My soul weepeth itself away, for grief, Confirm thou me, according to thy word.

Be not afraid of their faces, For with thee, am I, to deliver thee Declareth Yahweh.

But, the Lord, stood by me, and empowered me, in order that, through me, the proclamation, might be fully made, and, all the nations, might hear; and I was delivered out of the mouth of a lion: -

Thou, therefore, my child, be empowering thyself in the favour that is in Christ Jesus,

Now, therefore, I commend you unto the Lord, and unto his word of favour, - which is able to build up and give the inheritance among all the hallowed ones.

But, by favour of God, I am what I am, and, his favour, which was unto me, hath not been made void, - but, much more abundantly than they all, have I toiled, albeit not, I, but the favour of God with me.

With teachings, manifold and strange, be not carried aside; for it is, noble, that, with gratitude, should, the heart, be getting confirmed, - not with matters of food, in which, they who are walking, have not been profited.

Then responded he, and spake unto me, saying, This, is the word of Yahweh, unto Zerubbabel, saying, - Not by wealth, nor by strength, but by my spirit, saith Yahweh of hosts. Who, art, thou, O great mountain? Before Zerubbabel, brought down to a plain! So shall he bring forth the headstone, with thundering shouts Beautiful! Beautiful! thereunto.

Judges 14:6
Verse Concepts
Those Who Did Not TellAnimals Torn To PiecesDeliverance From Lions
Power, HumanTranceBrawn

And the Spirit of Yahweh, came suddenly over him, and he tore it in pieces as if he had torn in pieces a kid, there being, nothing at all, in his hand, - but he told not his father or his mother what he had done.

And Jesus returned, in the power of the Spirit, into Galilee; and, a report, went out along the whole of the region, concerning him;

Wherefore, lest I should be unduly lifted up, there was given to me a thorn o in the flesh, a messenger of Satan, that he might buffet me, - lest I should be unduly lifted up. In this behalf, thrice, besought I, the Lord, that it might depart from me; And at once he said unto me - Sufficient for thee, is my favour, for, my power, in weakness, is made complete. Most gladly, therefore, will I rather boast in my weaknesses, that the power of Christ may spread a tent over me.read more.
Wherefore, I take pleasure in weaknesses, in insults, in necessities, in persecutions, and straits, in behalf of Christ; for, as soon as I am weak, then, am powerful.

Out of the mouth of children and sucklings, hast thou laid a foundation of strength, - because of thine adversaries, to make foe and avenger be still.

But there came thither, from Antioch and Iconium, Jews, and, persuading the multitudes, and stoning Paul, they dragged him outside the city, supposing him to be dead. Howbeit, the disciples surrounding him, he rose up, and entered into the city. And, on the morrow, he went forth, with Barnabas, unto Derbe.

Spoiling the principalities and the authorities, he made of them an open example, celebrating a triumph over them thereby.

And what more can I say? For, time, will fail me while I go on telling - concerning Gideon, Barak, Sampson, Jephthah, David also, and Samuel, and the prophets, - Who, through faith - prevailed in contest over kingdoms, wrought righteousness, attained unto promises, shut the mouths of lions, Quenched the power of fire, escaped the mouths of the sword, were made powerful from weakness, became mighty in battle, overturned, camps of aliens;read more.
Women received, by resurrection, their dead; but, others, were put to the rack, not accepting redemption, that, unto a better resurrection, they might attain: Others, again, of mockings and scourgings, received trial, nay! further, of bonds and imprisonments: They were stoned, were pierced through, were sawn asunder, by murder, with a sword, died, went about in sheep-skins, in goat-hides, - being in want, suffering tribulation, enduring ill-treatment: Of whom the world, was not worthy - upon deserts, wandering, and mountains, and in caves, - and in the caverns of the earth.

Then said David unto the Philistine - Thou, art coming unto me with sword, and with spear, and with javelin, - but, I, am coming unto thee in the name of Yahweh of hosts, God of the ranks of Israel which thou hast reproached.

Thou thyself, art my king, O God, Command thou the victories of Jacob. By thee, will we thrust at, our adversaries, In thy Name, will we tread down our assailants; For, not in my bow, will I trust, Nor shall, my sword, give me victory;read more.
For thou hast saved us from our adversaries, And, them who hated us, hast thou put to shame. In God, have we boasted all the day, And, thy Name - unto times age-abiding, will we praise. Selah.

Yahweh, is on my side, I will not fear, What can man, do unto me?

Shadrach, Meshach, and Abed-nego answered, and said to the king: O Nebuchadnezzar! we are not accounting it needful, concerning this, to answer thee. If it is, our God, whom we serve, is able to deliver us, - out of the burning furnace of fire, and out of thy hand, O king, he will deliver. But, if not, be it known to thee, O king, - that, thy god, will we not serve, and, the image of gold which thou hast set up, will we not adore.

Again, a second time, departing he prayed, saying: My Father! If it is impossible for this to pass, except I, drink, it, Accomplished, be, thy will.

In order that, even as it is written - He that boasteth, in the Lord, let him boast.

With me, however, far be it! to be boasting, save in the cross of our Lord Jesus Christ, - whereby, unto me, a world hath been crucified, and, I, unto a world;

So that, taking courage, we may be saying - The Lord, hasteth to my cry, - I will not be put in fear: what shall, man, do unto me?

Take my yoke upon you, and learn of me, - because, meek, am I and lowly, in heart, and ye shall find rest unto your souls;

Now, the man Moses, was patient, exceedingly, - above all the sons of earth, who were on the face of the ground.

Nor, of men, seeking glory - either from you, or from others, though we could have assumed, dignity, as Apostles of Christ; But we became gentle in your midst, - as though, a nursing mother, had been cherishing her own children: Thus, yearning after you, we could have been well-pleased to impart unto you - not only the glad-message of God, but, our own lives also, - because, very dear to us, had ye become.