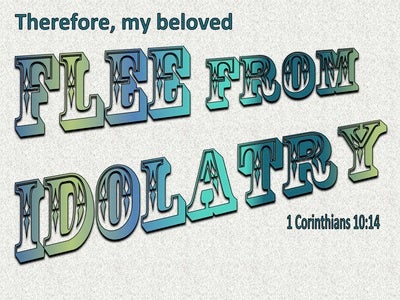 Those who fashion a graven image are all of them futile, and their precious things are of no profit; even their own witnesses fail to see or know, so that they will be put to shame. Who has fashioned a god or cast an idol to no profit? Behold, all his companions will be put to shame, for the craftsmen themselves are mere men. Let them all assemble themselves, let them stand up, let them tremble, let them together be put to shame.read more.
The man shapes iron into a cutting tool and does his work over the coals, fashioning it with hammers and working it with his strong arm. He also gets hungry and his strength fails; he drinks no water and becomes weary. Another shapes wood, he extends a measuring line; he outlines it with red chalk. He works it with planes and outlines it with a compass, and makes it like the form of a man, like the beauty of man, so that it may sit in a house. Surely he cuts cedars for himself, and takes a cypress or an oak and raises it for himself among the trees of the forest. He plants a fir, and the rain makes it grow. Then it becomes something for a man to burn, so he takes one of them and warms himself; he also makes a fire to bake bread. He also makes a god and worships it; he makes it a graven image and falls down before it. Half of it he burns in the fire; over this half he eats meat as he roasts a roast and is satisfied. He also warms himself and says, “Aha! I am warm, I have seen the fire.” But the rest of it he makes into a god, his graven image. He falls down before it and worships; he also prays to it and says, “Deliver me, for you are my god.” They do not know, nor do they understand, for He has smeared over their eyes so that they cannot see and their hearts so that they cannot comprehend. No one recalls, nor is there knowledge or understanding to say, “I have burned half of it in the fire and also have baked bread over its coals. I roast meat and eat it. Then I make the rest of it into an abomination, I fall down before a block of wood!” He feeds on ashes; a deceived heart has turned him aside. And he cannot deliver himself, nor say, “Is there not a lie in my right hand?”

So Jacob said to his household and to all who were with him, “Put away the foreign gods which are among you, and purify yourselves and change your garments;

“When you become the father of children and children’s children and have remained long in the land, and act corruptly, and make an idol in the form of anything, and do that which is evil in the sight of the Lord your God so as to provoke Him to anger,

“You shall not make for yourself an idol, or any likeness of what is in heaven above or on the earth beneath or in the water under the earth.

Do not turn to idols or make for yourselves molten gods; I am the Lord your God.

‘You shall have no other gods before Me.

Therefore, my beloved, flee from idolatry.

He took this from their hand, and fashioned it with a graving tool and made it into a molten calf; and they said, “This is your god, O Israel, who brought you up from the land of Egypt.”

You shall make for yourself no molten gods.

Brass » Articles made of » Idols

Brass » Made into » Idols

Gold » Was used for » Idols

Being then the children of God, we

He did evil in the sight of the Lord, though not like his father and his mother; for

Now when Asa heard these words and the

Then Samuel spoke to all the house of Israel, saying, “

So Jacob said to his

Iron » Made into » Idols

Iron » First recorded use of » Articles made of » Idols

its legs of iron, its feet partly of iron and partly of clay.

Protection » Not to be found in » Idols

"And He will say, 'Where are their gods, The rock in which they sought refuge? 'Who ate the fat of their sacrifices, And drank the wine of their drink offering? Let them rise up and help you, Let them be your hiding place! 'See now that I, I am He, And there is no god besides Me; It is I who put to death and give life I have wounded and it is I who heal, And there is no one who can deliver from My hand.

I know and am convinced in the Lord Jesus that nothing is unclean in itself; but to him who thinks anything to be unclean, to him it is unclean. For if because of food your brother is hurt, you are no longer walking according to love Do not destroy with your food him for whom Christ died. Therefore do not let what is for you a good thing be spoken of as evil; read more.
for the kingdom of God is not eating and drinking, but righteousness and peace and joy in the Holy Spirit. For he who in this way serves Christ is acceptable to God and approved by men. So then we pursue the things which make for peace and the building up of one another. Do not tear down the work of God for the sake of food All things indeed are clean, but they are evil for the man who eats and gives offense. It is good not to eat meat or to drink wine, or to do anything by which your brother stumbles. The faith which you have, have as your own conviction before God. Happy is he who does not condemn himself in what he approves. But he who doubts is condemned if he eats, because his eating is not from faith; and whatever is not from faith is sin.

Now concerning things sacrificed to idols, we know that we all have knowledge Knowledge makes arrogant, but love edifies. If anyone supposes that he knows anything, he has not yet known as he ought to know; but if anyone loves God, he is known by Him. read more.
Therefore concerning the eating of things sacrificed to idols, we know that there is no such thing as an idol in the world, and that there is no God but one. For even if there are so-called gods whether in heaven or on earth, as indeed there are many gods and many lords, yet for us there is but one God, the Father, from whom are all things and we exist for Him; and one Lord, Jesus Christ, by whom are all things, and we exist through Him. However not all men have this knowledge; but some, being accustomed to the idol until now, eat food as if it were sacrificed to an idol; and their conscience being weak is defiled. But food will not commend us to God; we are neither the worse if we do not eat, nor the better if we do eat. But take care that this liberty of yours does not somehow become a stumbling block to the weak. For if someone sees you, who have knowledge, dining in an idol's temple, will not his conscience, if he is weak, be strengthened to eat things sacrificed to idols? For through your knowledge he who is weak is ruined, the brother for whose sake Christ died. And so, by sinning against the brethren and wounding their conscience when it is weak, you sin against Christ. Therefore, if food causes my brother to stumble, I will never eat meat again, so that I will not cause my brother to stumble.

Therefore, my beloved, flee from idolatry. I speak as to wise men; you judge what I say. Is not the cup of blessing which we bless a sharing in the blood of Christ? Is not the bread which we break a sharing in the body of Christ? read more.
Since there is one bread, we who are many are one body; for we all partake of the one bread. Look at the nation Israel; are not those who eat the sacrifices sharers in the altar? What do I mean then? That a thing sacrificed to idols is anything, or that an idol is anything? No, but I say that the things which the Gentiles sacrifice, they sacrifice to demons and not to God; and I do not want you to become sharers in demons. You cannot drink the cup of the Lord and the cup of demons; you cannot partake of the table of the Lord and the table of demons. Or do we provoke the Lord to jealousy? We are not stronger than He, are we? All things are lawful, but not all things are profitable All things are lawful, but not all things edify. Let no one seek his own good, but that of his neighbor. Eat anything that is sold in the meat market without asking questions for conscience' sake; FOR THE EARTH IS THE LORD'S, AND ALL IT CONTAINS. If one of the unbelievers invites you and you want to go, eat anything that is set before you without asking questions for conscience' sake. But if anyone says to you, "This is meat sacrificed to idols," do not eat it, for the sake of the one who informed you, and for conscience' sake; I mean not your own conscience, but the other man's; for why is my freedom judged by another's conscience? If I partake with thankfulness, why am I slandered concerning that for which I give thanks? Whether, then, you eat or drink or whatever you do, do all to the glory of God. Give no offense either to Jews or to Greeks or to the church of God; just as I also please all men in all things, not seeking my own profit but the profit of the many, so that they may be saved.

Salvation » Sought in vain from » Idols

Silver » Made into » Idols

And you will defile your graven

And you will defile your graven

Wicked, the, are compared to » Idols

The graven images of their gods you are to

Therefore concerning the eating of

He does not eat at the mountain shrines or lift up his eyes to the idols of the house of Israel, or defile his neighbor’s wife,

You must not turn aside, for then you would go after