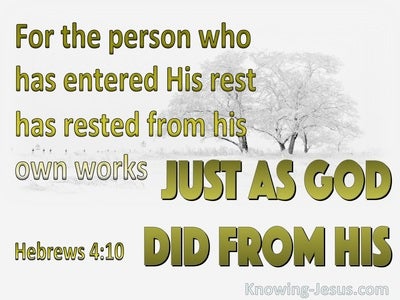 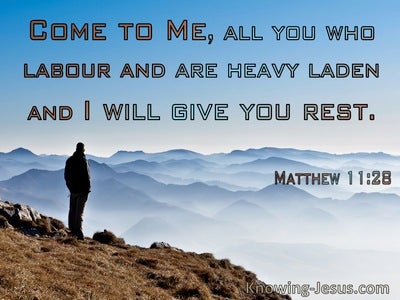 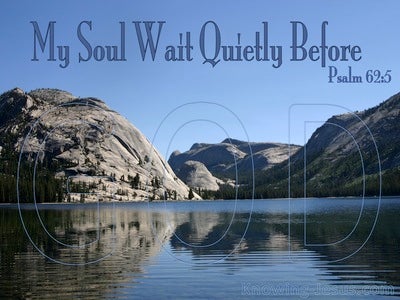 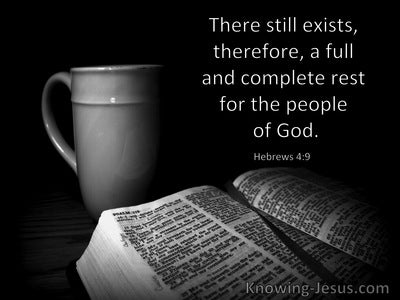 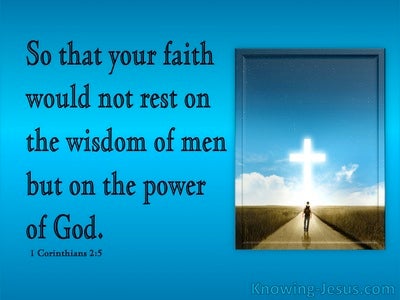 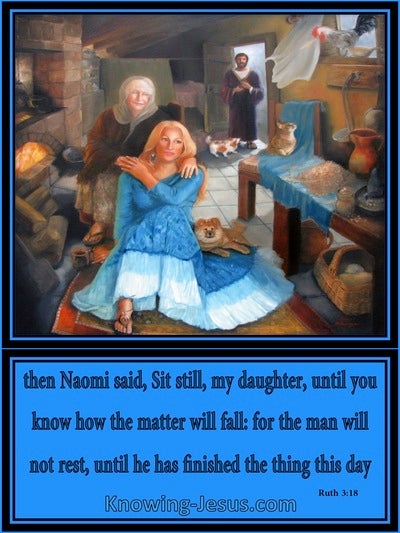 For the one who has entered His rest has himself also rested from his works, as God did from His.

For we who have believed enter that rest, just as He has said,
“As I swore in My wrath,
They shall not enter My rest,”
although His works were finished from the foundation of the world.

“Come to Me, all who are weary and heavy-laden, and I will give you rest.

Joshua 21:44
Verse Concepts
Those God Gave Into Their HandsTime Of Peace
Invincibility

“For six days work may be done, but on the seventh day you shall have a holy day, a sabbath of complete rest to the Lord; whoever does any work on it shall be put to death.

But now the Lord my God has given me rest on every side; there is neither adversary nor misfortune.

Then my people will live in a peaceful habitation,
And in secure dwellings and in undisturbed resting places;

“Six days you are to do your work, but on the seventh day you shall cease from labor so that your ox and your donkey may rest, and the son of your female slave, as well as your stranger, may refresh themselves.

And give Him no rest until He establishes
And makes Jerusalem a praise in the earth.

“Then you would trust, because there is hope;
And you would look around and rest securely.

but during the seventh year the land shall have a sabbath rest, a sabbath to the Lord; you shall not sow your field nor prune your vineyard.

For thus the Lord God, the Holy One of Israel, has said,
“In repentance and rest you will be saved,
In quietness and trust is your strength.”
But you were not willing,

So there remains a Sabbath rest for the people of God.

Return to your rest, O my soul,
For the Lord has dealt bountifully with you.

In peace I will both lie down and sleep,
For You alone, O Lord, make me to dwell in safety.

for you have not as yet come to the resting place and the inheritance which the Lord your God is giving you.

so that your faith would not rest on the wisdom of men, but on the power of God.

And He *said to them, “Come away by yourselves to a secluded place and rest a while.” (For there were many people coming and going, and they did not even have time to eat.)

I will not give sleep to my eyes
Or slumber to my eyelids,

then he said to them, “This is what the Lord meant: Tomorrow is a sabbath observance, a holy sabbath to the Lord. Bake what you will bake and boil what you will boil, and all that is left over put aside to be kept until morning.”

It is to be a sabbath of complete rest to you, and you shall humble your souls; on the ninth of the month at evening, from evening until evening you shall keep your sabbath.”

Thus says the Lord,
“The people who survived the sword
Found grace in the wilderness—
Israel, when it went to find its rest.”

“This is My resting place forever;
Here I will dwell, for I have desired it.

For six days work may be done, but on the seventh day there is a sabbath of complete rest, holy to the Lord; whoever does any work on the sabbath day shall surely be put to death.

“The whole earth is at rest and is quiet;
They break forth into shouts of joy.

“Arise and go,
For this is no place of rest
Because of the uncleanness that brings on destruction,
A painful destruction.

He who said to them, “Here is rest, give rest to the weary,”
And, “Here is repose,” but they would not listen.

“There the wicked cease from raging,
And there the weary are at rest.

“When the unclean spirit goes out of a man, it passes through waterless places seeking rest, and not finding any, it says, ‘I will return to my house from which I came.’

For if Joshua had given them rest, He would not have spoken of another day after that.

Then she said, “Wait, my daughter, until you know how the matter turns out; for the man will not rest until he has settled it today.”

Thus says the Lord,
“Heaven is My throne and the earth is My footstool.
Where then is a house you could build for Me?
And where is a place that I may rest?

It is vain for you to rise up early,
To retire late,
To eat the bread of painful labors;
For He gives to His beloved even in his sleep.

“A little sleep, a little slumber,
A little folding of the hands to rest,”

‘For six days work may be done, but on the seventh day there is a sabbath of complete rest, a holy convocation. You shall not do any work; it is a sabbath to the Lord in all your dwellings.

So they answered the angel of the Lord who was standing among the myrtle trees and said, “We have patrolled the earth, and behold, all the earth is peaceful and quiet.”

Behold, a son will be born to you, who shall be a man of rest; and I will give him rest from all his enemies on every side; for his name shall be Solomon, and I will give peace and quiet to Israel in his days.

One hand full of rest is better than two fists full of labor and striving after wind.

until the Lord gives your brothers rest, as He gives you, and they also possess the land which the Lord your God is giving them. Then you shall return to your own land, and possess that which Moses the servant of the Lord gave you beyond the Jordan toward the sunrise.”

but on the seventh year you shall let it rest and lie fallow, so that the needy of your people may eat; and whatever they leave the beast of the field may eat. You are to do the same with your vineyard and your olive grove.

the Death of saints » Leads to » Rest

the Gifts of God » Spiritual » Rest

You shall not do any work on this same day, for it is a

On this same day you shall

And behold, there arose

Matthew 8:18
Verse Concepts
Crowds Around JesusCrowds Avoided
Crossing To The Other Side

Now when Jesus saw a crowd around Him,

Therefore, let us fear if, while a promise remains of entering His rest, any one of you may seem to have come short of it. For indeed we have had good news preached to us, just as they also; but the word they heard did not profit them, because it was not united by faith in those who heard. For we who have believed enter that rest, just as He has said, "AS I SWORE IN MY WRATH, THEY SHALL NOT ENTER MY REST," although His works were finished from the foundation of the world. read more.
For He has said somewhere concerning the seventh day: "AND GOD RESTED ON THE SEVENTH DAY FROM ALL HIS WORKS"; and again in this passage, "THEY SHALL NOT ENTER MY REST." Therefore, since it remains for some to enter it, and those who formerly had good news preached to them failed to enter because of disobedience, He again fixes a certain day, "Today," saying through David after so long a time just as has been said before, "TODAY IF YOU HEAR HIS VOICE, DO NOT HARDEN YOUR HEARTS." For if Joshua had given them rest, He would not have spoken of another day after that. So there remains a Sabbath rest for the people of God. For the one who has entered His rest has himself also rested from his works, as God did from His. Therefore let us be diligent to enter that rest, so that no one will fall, through following the same example of disobedience.

the Reward of saints » Described as » Rest

And I heard a voice from heaven, saying, “Write, ‘

So there remains a Sabbath rest for the people of God.

For thus the Lord

And I heard a voice from heaven, saying, “Write, ‘

For we who have believed enter that rest, just as He has said,

And He *said to them, (For there were many people coming and going, and

Lying Down To Rest

For we who have believed enter that rest, just as He has said,

and Jacob’s well was there. So Jesus, being wearied from His journey, was sitting thus by the well. It was about