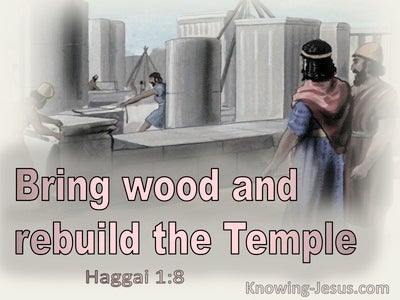 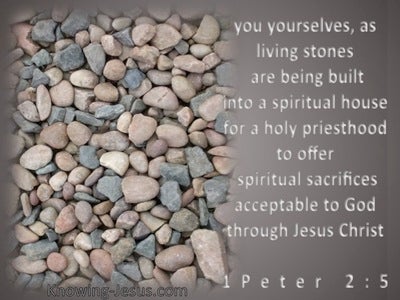 Then the king commanded, and they quarried great stones, costly stones, to lay the foundation of the house with cut stones.

Go up to the mountains, bring wood and rebuild the temple, that I may be pleased with it and be glorified,” says the Lord.

“And you shall make the altar of acacia wood, five cubits long and five cubits wide; the altar shall be square, and its height shall be three cubits.

So he built the house and finished it; and he covered the house with beams and planks of cedar.

Then Solomon sent word to Huram the king of Tyre, saying, “As you dealt with David my father and sent him cedars to build him a house to dwell in, so do for me.

“Now Bezalel and Oholiab, and every skillful person in whom the Lord has put skill and understanding to know how to perform all the work in the construction of the sanctuary, shall perform in accordance with all that the Lord has commanded.”

Then David said, “This is the house of the Lord God, and this is the altar of burnt offering for Israel.” So David gave orders to gather the foreigners who were in the land of Israel, and he set stonecutters to hew out stones to build the house of God.

He bought the hill Samaria from Shemer for two talents of silver; and he built on the hill, and named the city which he built Samaria, after the name of Shemer, the owner of the hill.

Judges 1:26
Verse Concepts
Given Names To This Day

The man went into the land of the Hittites and built a city and named it Luz which is its name to this day.

He built the city all around, from the Millo even to the surrounding area; and Joab repaired the rest of the city.

We have obeyed the voice of Jonadab the son of Rechab, our father, in all that he commanded us, not to drink wine all our days, we, our wives, our sons or our daughters, nor to build ourselves houses to dwell in; and we do not have vineyard or field or seed.

The God who made the world and all things in it, since He is Lord of heaven and earth, does not dwell in temples made with hands;

“I have surely built You a lofty house,
A place for Your dwelling forever.”

Now when the builders had laid the foundation of the temple of the Lord, the priests stood in their apparel with trumpets, and the Levites, the sons of Asaph, with cymbals, to praise the Lord according to the directions of King David of Israel.

Then Joshua built an altar to the Lord, the God of Israel, in Mount Ebal, just as Moses the servant of the Lord had commanded the sons of Israel, as it is written in the book of the law of Moses, an altar of uncut stones on which no man had wielded an iron tool; and they offered burnt offerings on it to the Lord, and sacrificed peace offerings.

Moses wrote down all the words of the Lord. Then he arose early in the morning, and built an altar at the foot of the mountain with twelve pillars for the twelve tribes of Israel.

David built there an altar to the Lord and offered burnt offerings and peace offerings. Thus the Lord was moved by prayer for the land, and the plague was held back from Israel.

Then Hiram king of Tyre sent messengers to David with cedar trees and carpenters and stonemasons; and they built a house for David.

Then Solomon formed a marriage alliance with Pharaoh king of Egypt, and took Pharaoh’s daughter and brought her to the city of David until he had finished building his own house and the house of the Lord and the wall around Jerusalem.

He built the house of the forest of Lebanon; its length was 100 cubits and its width 50 cubits and its height 30 cubits, on four rows of cedar pillars with cedar beams on the pillars.

For Israel has forgotten his Maker and built palaces;
And Judah has multiplied fortified cities,
But I will send a fire on its cities that it may consume its palatial dwellings.

Then I said to them, “You see the bad situation we are in, that Jerusalem is desolate and its gates burned by fire. Come, let us rebuild the wall of Jerusalem so that we will no longer be a reproach.” I told them how the hand of my God had been favorable to me and also about the king’s words which he had spoken to me. Then they said, “Let us arise and build.” So they put their hands to the good work.

They said, “Come, let us build for ourselves a city, and a tower whose top will reach into heaven, and let us make for ourselves a name, otherwise we will be scattered abroad over the face of the whole earth.” The Lord came down to see the city and the tower which the sons of men had built.

For we know that if the earthly tent which is our house is torn down, we have a building from God, a house not made with hands, eternal in the heavens.

And coming to Him as to a living stone which has been rejected by men, but is choice and precious in the sight of God, you also, as living stones, are being built up as a spiritual house for a holy priesthood, to offer up spiritual sacrifices acceptable to God through Jesus Christ.

Then it will be, that if you listen to all that I command you and walk in My ways, and do what is right in My sight by observing My statutes and My commandments, as My servant David did, then I will be with you and build you an enduring house as I built for David, and I will give Israel to you.

The stone which the builders rejected
Has become the chief corner stone.

Jesus *said to them, “Did you never read in the Scriptures,
‘The stone which the builders rejected,
This became the chief corner stone;
This came about from the Lord,
And it is marvelous in our eyes’?

For we know that if

So Hiram sent word to Solomon, saying, “I have heard the message which you have sent me; I will do

"Is it time for you yourselves to dwell in your paneled houses while this house lies desolate?" Now therefore, thus says the LORD of hosts, "Consider your ways! "You have sown much, but harvest little; you eat, but there is not enough to be satisfied; you drink, but there is not enough to become drunk; you put on clothing, but no one is warm enough; and he who earns, earns wages to put into a purse with holes." read more.
Thus says the LORD of hosts, "Consider your ways! "Go up to the mountains, bring wood and rebuild the temple, that I may be pleased with it and be glorified," says the LORD. "You look for much, but behold, it comes to little; when you bring it home, I blow it away Why?" declares the LORD of hosts, "Because of My house which lies desolate, while each of you runs to his own house.

They said to one another, “Come, let us make bricks and burn them thoroughly.” And they used brick for stone, and they used

Similitudes » The church compared to » Building

Luke 21:5
Verse Concepts
Adornment, Of BuildingsBeauty, In Artefacts
Beauty Of ThingsStatus Of The Temple

Then Balaam said to Balak, “Build seven altars for me here, and prepare seven bulls and seven rams for me here.”

A Song of Ascents, of Solomon.

Building Each Other Up

that the king said to

Building Up The Church

As for the house which King Solomon built for the Lord, its length was sixty