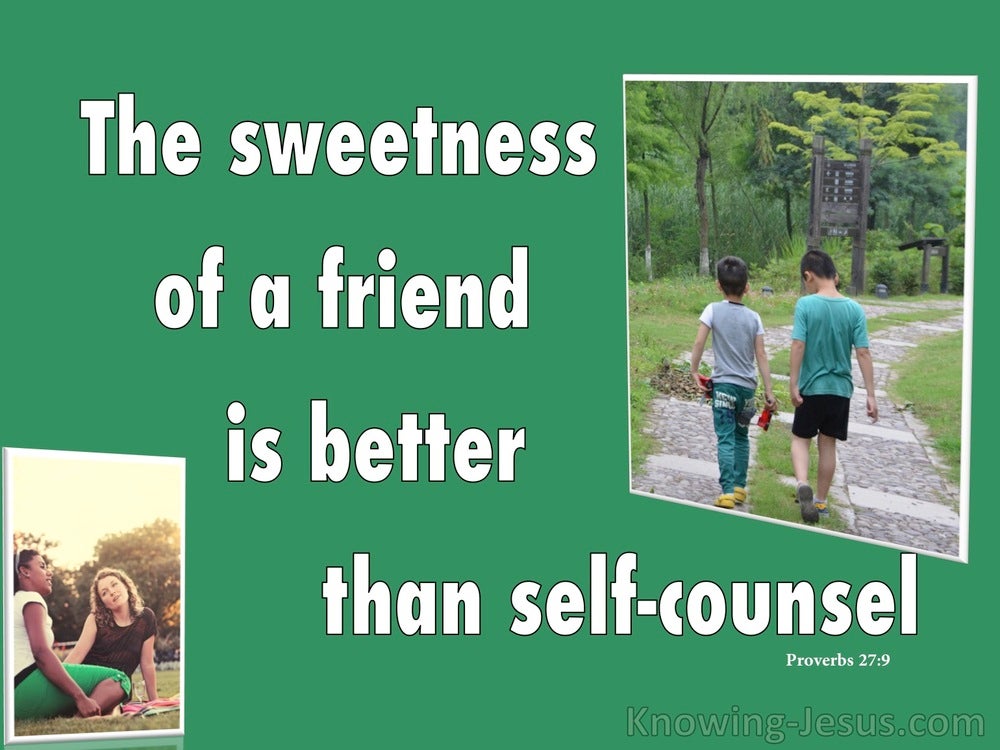 Oil and perfume make the heart glad,
So a man’s counsel is sweet to his friend.

Without consultation, plans are frustrated,
But with many counselors they succeed.

The way of a fool is right in his own eyes,
But a wise man is he who listens to counsel.

For by wise guidance you will wage war,
And in abundance of counselors there is victory.

Where there is no guidance the people fall,
But in abundance of counselors there is victory.

The young men who grew up with him spoke to him, saying, “Thus you shall say to this people who spoke to you, saying, ‘Your father made our yoke heavy, now you make it lighter for us!’ But you shall speak to them, ‘My little finger is thicker than my father’s loins!

Then they spoke to him, saying, “

Therefore, O king, may my

Counsel » The importance of seeking

Now there came a day when Elisha passed over to Shunem, where there was a prominent woman, and she persuaded him to eat food. And so it was, as often as he passed by, he turned in there to eat food. She said to her husband, "Behold now, I perceive that this is a holy man of God passing by us continually. "Please, let us make a little walled upper chamber and let us set a bed for him there, and a table and a chair and a lampstand; and it shall be, when he comes to us, that he can turn in there."

So Manoah said to his wife, "We will surely die, for we have seen God." But his wife said to him, "If the LORD had desired to kill us, He would not have accepted a burnt offering and a grain offering from our hands, nor would He have shown us all these things, nor would He have let us hear things like this at this time."

The queen entered the banquet hall because of the words of the king and his nobles; the queen spoke and said, "O king, live forever! Do not let your thoughts alarm you or your face be pale. "There is a man in your kingdom in whom is a spirit of the holy gods; and in the days of your father, illumination, insight and wisdom like the wisdom of the gods were found in him And King Nebuchadnezzar, your father, your father the king, appointed him chief of the magicians, conjurers, Chaldeans and diviners. "This was because an extraordinary spirit, knowledge and insight, interpretation of dreams, explanation of enigmas and solving of difficult problems were found in this Daniel, whom the king named Belteshazzar. Let Daniel now be summoned and he will declare the interpretation."

Counsel » The counsel(s) of the lord

So Saul died for his trespass which he committed against the LORD, because of the word of the LORD which he did not keep; and also because he asked counsel of a medium, making inquiry of it, and did not inquire of the LORD. Therefore He killed him and turned the kingdom to David the son of Jesse.

Counsel » The multitude of counselors

Counsel » The place where there is no counsel

Counsel » What is established by counsel

Counsel » Those that consult pagans

Counsel » There being no counsel against the lord

Counsel » Those that listen to counsel

Counsel » The counselors of peace

Counsel » Whose counsel should not be heeded

Counsel » Counsel in the heart of man

Counsel » The counsels of the wicked

Counsel » Those that take counsel together against the lord

Why are the nations in an uproar And the peoples devising a vain thing? The kings of the earth take their stand And the rulers take counsel together Against the LORD and against His Anointed, saying, "Let us tear their fetters apart And cast away their cords from us!" read more.
He who sits in the heavens laughs, The Lord scoffs at them. Then He will speak to them in His anger And terrify them in His fury, saying, "But as for Me, I have installed My King Upon Zion, My holy mountain."

Counsel » The counsel of the heathen

Counsel » Instances of » By rehoboam

"Because I called and you refused, I stretched out my hand and no one paid attention; And you neglected all my counsel And did not want my reproof; I will also laugh at your calamity; I will mock when your dread comes, read more.
When your dread comes like a storm And your calamity comes like a whirlwind, When distress and anguish come upon you. "Then they will call on me, but I will not answer; They will seek me diligently but they will not find me, Because they hated knowledge And did not choose the fear of the LORD. "They would not accept my counsel, They spurned all my reproof. "So they shall eat of the fruit of their own way And be satiated with their own devices. "For the waywardness of the naive will kill them, And the complacency of fools will destroy them. "But he who listens to me shall live securely And will be at ease from the dread of evil."

Counsel » Instances of » By the rich young ruler

But when the young man heard this statement, he went away grieving; for he was one who owned much property.

Counsel » The counsel of the froward

The young men who grew up with him spoke to him, saying, “Thus you shall say to this people who spoke to you, saying, ‘Your father made our yoke heavy, now you make it lighter for us!’ But you shall speak to them, ‘My little finger is thicker than my father’s loins!