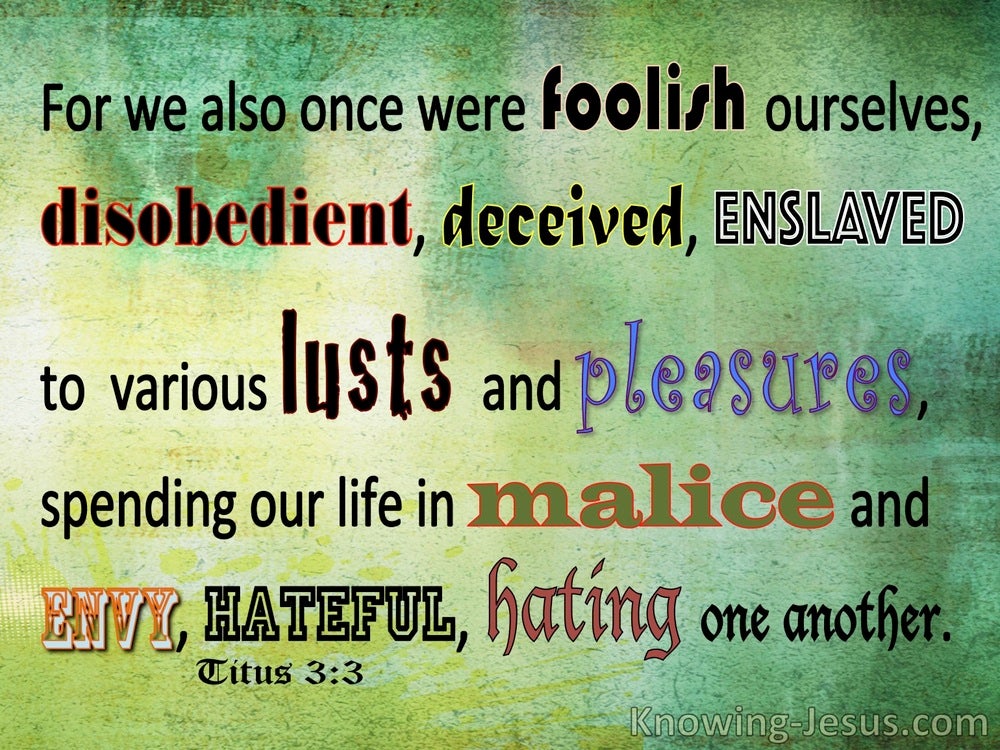 Do not let your heart envy sinners,
But live in the fear of the Lord always.

For we also once were foolish ourselves, disobedient, deceived, enslaved to various lusts and pleasures, spending our life in malice and envy, hateful, hating one another.

Some, to be sure, are preaching Christ even from envy and strife, but some also from good will;

Wrath is fierce and anger is a flood,
But who can stand before jealousy?

being filled with all unrighteousness, wickedness, greed, evil; full of envy, murder, strife, deceit, malice; they are gossips,

he is conceited and understands nothing; but he has a morbid interest in controversial questions and disputes about words, out of which arise envy, strife, abusive language, evil suspicions,

Envy » Who not to envy

Do not fret because of evildoers, Be not envious toward wrongdoers. For they will wither quickly like the grass And fade like the green herb.

Do not be envious of evil men, Nor desire to be with them; For their minds devise violence, And their lips talk of trouble.

Envy » Prosperity of the wicked should not excite

Until I came into the sanctuary of God; Then I perceived their end. Surely You set them in slippery places; You cast them down to destruction. How they are destroyed in a moment! They are utterly swept away by sudden terrors! read more.
Like a dream when one awakes, O Lord, when aroused, You will despise their form.

Envy » A proof of carnal-mindedness

And I, brethren, could not speak to you as to

Envy » Instances of » Priests, of jesus

For he knew that because of envy they had handed Him over.

Envy » What envy does

"Call now, is there anyone who will answer you? And to which of the holy ones will you turn? "For anger slays the foolish man, And jealousy kills the simple.

Envy » A work of the flesh

His brothers saw that their father loved him more than all his brothers; and so they hated him and could not speak to him on friendly terms. Then Joseph had a dream, and when he told it to his brothers, they hated him even more. He said to them, "Please listen to this dream which I have had; read more.
for behold, we were binding sheaves in the field, and lo, my sheaf rose up and also stood erect; and behold, your sheaves gathered around and bowed down to my sheaf." Then his brothers said to him, "Are you actually going to reign over us? Or are you really going to rule over us?" So they hated him even more for his dreams and for his words. Now he had still another dream, and related it to his brothers, and said, "Lo, I have had still another dream; and behold, the sun and the moon and eleven stars were bowing down to me." He related it to his father and to his brothers; and his father rebuked him and said to him, "What is this dream that you have had? Shall I and your mother and your brothers actually come to bow ourselves down before you to the ground?" His brothers were jealous of him, but his father kept the saying in mind.

They said to one another, "Here comes this dreamer! "Now then, come and let us kill him and throw him into one of the pits; and we will say, 'A wild beast devoured him.' Then let us see what will become of his dreams!"

Envy » Hurtful to the envious

Envy » Instances of » Korah, dathan, and abiram, of moses

When they became envious of Moses in the camp, And of Aaron, the holy one of the LORD, The earth opened and swallowed up Dathan, And engulfed the company of Abiram. And a fire blazed up in their company; The flame consumed the wicked.

Envy » Instances of » Saul, of david

then Saul was even more afraid of David. Thus Saul was David’s enemy continually.

Then Saul became very angry, for this saying displeased him; and he said, "They have ascribed to David ten thousands, but to me they have ascribed thousands. Now what more can he have but the kingdom?" Saul looked at David with suspicion from that day on.

Envy » Instances of » Sarah, of hagar

And Sarai said to Abram, "May the wrong done me be upon you I gave my maid into your arms, but when she saw that she had conceived, I was despised in her sight May the LORD judge between you and me." But Abram said to Sarai, "Behold, your maid is in your power; do to her what is good in your sight." So Sarai treated her harshly, and she fled from her presence.

Now Sarah saw the son of Hagar the Egyptian, whom she had borne to Abraham, mocking. Therefore she said to Abraham, "Drive out this maid and her son, for the son of this maid shall not be an heir with my son Isaac."

Envy » Who has envy among them

Then Joshua the son of Nun, the attendant of Moses from his youth, said, "Moses, my lord, restrain them." But Moses said to him, "Are you jealous for my sake? Would that all the LORD'S people were prophets, that the LORD would put His Spirit upon them!"

Envy » Excited by good deeds of others

Envy » Instances of » Jews, of paul and barnabas

therefore as I live,” declares the Lord God, “I will deal with you

Then Saul became very angry, for this saying

Envy » The place where envy exists

Who among you is wise and understanding? Let him show by his good behavior his deeds in the gentleness of wisdom. But if you have bitter jealousy and selfish ambition in your heart, do not be arrogant and so lie against the truth. This wisdom is not that which comes down from above, but is earthly, natural, demonic. read more.
For where jealousy and selfish ambition exist, there is disorder and every evil thing.

Envy » None can stand before

Then this Daniel began distinguishing himself among the commissioners and satraps because he possessed an extraordinary spirit, and the king planned to appoint him over the entire kingdom. Then the commissioners and satraps began trying to find a ground of accusation against Daniel in regard to government affairs; but they could find no ground of accusation or evidence of corruption, inasmuch as he was faithful, and no negligence or corruption was to be found in him.

Envy » The wicked » Being Full of

being filled with all unrighteousness, wickedness, greed, evil; full of envy, murder, strife, deceit, malice; they are

Envy » Instances of » Joshua, of eldad and medad

Then Joshua the son of Nun, the attendant of Moses from his youth, said, "Moses, my lord, restrain them." But Moses said to him, "Are you jealous for my sake? Would that all the LORD'S people were prophets, that the LORD would put His Spirit upon them!" Then Moses returned to the camp, both he and the elders of Israel.

Envy » Instances of » Miriam and aaron, of moses

Then Miriam and Aaron spoke against Moses because of the Cushite woman whom he had married (for he had married a Cushite woman); and they said, "Has the LORD indeed spoken only through Moses? Has He not spoken through us as well?" And the LORD heard it. (Now the man Moses was very humble, more than any man who was on the face of the earth.) read more.
Suddenly the LORD said to Moses and Aaron and to Miriam, "You three come out to the tent of meeting." So the three of them came out. Then the LORD came down in a pillar of cloud and stood at the doorway of the tent, and He called Aaron and Miriam. When they had both come forward, He said, "Hear now My words: If there is a prophet among you, I, the LORD, shall make Myself known to him in a vision I shall speak with him in a dream. "Not so, with My servant Moses, He is faithful in all My household; With him I speak mouth to mouth, Even openly, and not in dark sayings, And he beholds the form of the LORD. Why then were you not afraid To speak against My servant, against Moses?" So the anger of the LORD burned against them and He departed. But when the cloud had withdrawn from over the tent, behold, Miriam was leprous, as white as snow. As Aaron turned toward Miriam, behold, she was leprous.

Envy » Inconsistent with » The gospel

But if you have bitter

Envy » Leads to every evil work

Envy » The wicked » Live in

Envy » What lusts to envy

Envy » Instances of » Philistines, of isaac

Envy » Instances of » Leah, of rachel

But she said to her, “Is it a small matter for you to take my husband? And would you take my son’s mandrakes also?” So Rachel said, “Therefore he may lie with you tonight in return for your son’s mandrakes.”

Envy » Instances of » Cain, of abel

Abel, on his part also brought of the firstlings of his flock and of their fat portions And the LORD had regard for Abel and for his offering; but for Cain and for his offering He had no regard So Cain became very angry and his countenance fell. Then the LORD said to Cain, "Why are you angry? And why has your countenance fallen? read more.
"If you do well, will not your countenance be lifted up? And if you do not do well, sin is crouching at the door; and its desire is for you, but you must master it." Cain told Abel his brother. And it came about when they were in the field, that Cain rose up against Abel his brother and killed him.

Envy » Instances of » Haman, of mordecai

Envy » Instances of » Rachel, of leah

Now when Rachel saw that

Envy » Instances of » The princes of babylon, of daniel