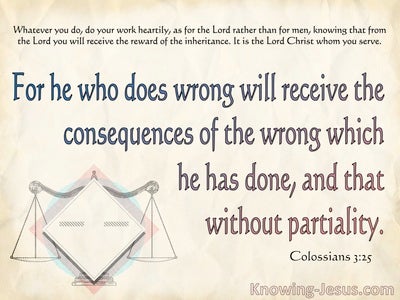 You have borne the penalty of your lewdness and abominations,” the Lord declares.

For he who does wrong will receive the consequences of the wrong which he has done, and that without partiality.

Moreover, the man will be free from guilt, but that woman shall bear her guilt.’”

Death and life are in the power of the tongue,
And those who love it will eat its fruit.

Our fathers sinned, and are no more;
It is we who have borne their iniquities.

You shall not afflict any widow or orphan.

You shall speak to the sons of Israel, saying, ‘If anyone curses his God, then he will bear his sin.

‘Now if a person sins after he hears a public adjuration to testify when he is a witness, whether he has seen or otherwise known, if he does not tell it, then he will bear his guilt.

Therefore, thus says the Lord God, ‘Because you have forgotten Me and cast Me behind your back, bear now the punishment of your lewdness and your harlotries.’”

Because the sentence against an evil deed is not executed quickly, therefore the hearts of the sons of men among them are given fully to do evil.

“Go and speak to David, ‘Thus the Lord says, “I am offering you three things; choose for yourself one of them, which I will do to you.”’”

But the man who is clean and is not on a journey, and yet neglects to observe the Passover, that person shall then be cut off from his people, for he did not present the offering of the Lord at its appointed time. That man will bear his sin.

For each one will bear his own load.

Your lewdness will be requited upon you, and you will bear the penalty of worshiping your idols; thus you will know that I am the Lord God.’”

According to the number of days which you spied out the land, forty days, for every day you shall bear your guilt a year, even forty years, and you will know My opposition.

A prudent man sees evil and hides himself,
The naive proceed and pay the penalty.

For if we go on sinning willfully after receiving the knowledge of the truth, there no longer remains a sacrifice for sins,

If a malicious witness rises up against a man to accuse him of wrongdoing,

Rejoice, young man, during your childhood, and let your heart be pleasant during the days of young manhood. And follow the impulses of your heart and the desires of your eyes. Yet know that God will bring you to judgment for all these things.

“Because I called and you refused,
I stretched out my hand and no one paid attention;

But when the kindness of God our Savior and His love for mankind appeared,

So are the ways of everyone who gains by violence;
It takes away the life of its possessors.

So now we call the arrogant blessed; not only are the doers of wickedness built up but they also test God and escape.’”

“Yet you said, ‘I will be a queen forever.’
These things you did not consider
Nor remember the outcome of them.

Woe to you, O land, whose king is a lad and whose princes feast in the morning.

For the sons of Israel walked forty years in the wilderness, until all the nation, that is, the men of war who came out of Egypt, perished because they did not listen to the voice of the Lord, to whom the Lord had sworn that He would not let them see the land which the Lord had sworn to their fathers to give us, a land flowing with milk and honey.

A man of great anger will bear the penalty,
For if you rescue him, you will only have to do it again.

“But it shall come about, if you do not obey the Lord your God, to observe to do all His commandments and His statutes with which I charge you today, that all these curses will come upon you and overtake you:

The Scripture, foreseeing that God would justify the Gentiles by faith, preached the gospel beforehand to Abraham, saying, “All the nations will be blessed in you.”

“So they shall eat of the fruit of their own way
And be satiated with their own devices.

Because they ministered to them before their idols and became a stumbling block of iniquity to the house of Israel, therefore I have sworn against them,” declares the Lord God, “that they shall bear the punishment for their iniquity.

But Moses said to the LORD, "Then the Egyptians will hear of it, for by Your strength You brought up this people from their midst, and they will tell it to the inhabitants of this land. They have heard that You, O LORD, are in the midst of this people, for You, O LORD, are seen eye to eye, while Your cloud stands over them; and You go before them in a pillar of cloud by day and in a pillar of fire by night. "Now if You slay this people as one man, then the nations who have heard of Your fame will say, read more.
'Because the LORD could not bring this people into the land which He promised them by oath, therefore He slaughtered them in the wilderness.' "But now, I pray, let the power of the Lord be great, just as You have declared, 'The LORD is slow to anger and abundant in lovingkindness, forgiving iniquity and transgression; but He will by no means clear the guilty, visiting the iniquity of the fathers on the children to the third and the fourth generations.' "Pardon, I pray, the iniquity of this people according to the greatness of Your lovingkindness, just as You also have forgiven this people, from Egypt even until now." So the LORD said, "I have pardoned them according to your word; but indeed, as I live, all the earth will be filled with the glory of the LORD. "Surely all the men who have seen My glory and My signs which I performed in Egypt and in the wilderness, yet have put Me to the test these ten times and have not listened to My voice, shall by no means see the land which I swore to their fathers, nor shall any of those who spurned Me see it. "But My servant Caleb, because he has had a different spirit and has followed Me fully, I will bring into the land which he entered, and his descendants shall take possession of it. "Now the Amalekites and the Canaanites live in the valleys; turn tomorrow and set out to the wilderness by the way of the Red Sea." The LORD spoke to Moses and Aaron, saying, "How long shall I bear with this evil congregation who are grumbling against Me? I have heard the complaints of the sons of Israel, which they are making against Me. "Say to them, 'As I live,' says the LORD, 'just as you have spoken in My hearing, so I will surely do to you; your corpses will fall in this wilderness, even all your numbered men, according to your complete number from twenty years old and upward, who have grumbled against Me. 'Surely you shall not come into the land in which I swore to settle you, except Caleb the son of Jephunneh and Joshua the son of Nun. 'Your children, however, whom you said would become a prey--I will bring them in, and they will know the land which you have rejected. 'But as for you, your corpses will fall in this wilderness. 'Your sons shall be shepherds for forty years in the wilderness, and they will suffer for your unfaithfulness, until your corpses lie in the wilderness. 'According to the number of days which you spied out the land, forty days, for every day you shall bear your guilt a year, even forty years, and you will know My opposition. 'I, the LORD, have spoken, surely this I will do to all this evil congregation who are gathered together against Me. In this wilderness they shall be destroyed, and there they will die.'" As for the men whom Moses sent to spy out the land and who returned and made all the congregation grumble against him by bringing out a bad report concerning the land, even those men who brought out the very bad report of the land died by a plague before the LORD. But Joshua the son of Nun and Caleb the son of Jephunneh remained alive out of those men who went to spy out the land. When Moses spoke these words to all the sons of Israel, the people mourned greatly.