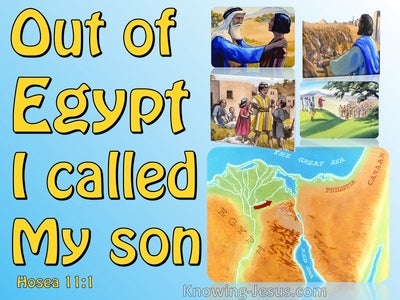 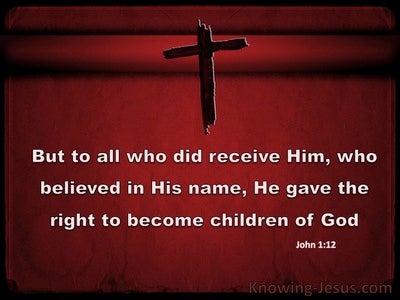 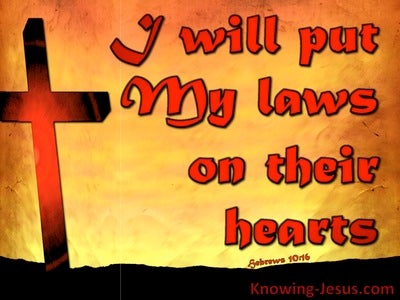 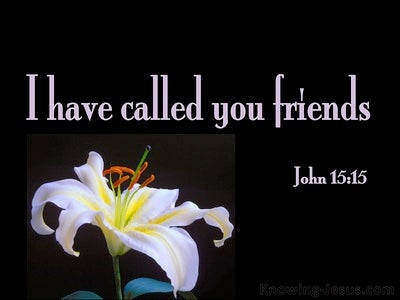 I will say to the north, 'Hand them over!' and to the south, 'Don't hold any back!' Bring my sons from distant lands, and my daughters from the remote regions of the earth, everyone who belongs to me, whom I created for my glory, whom I formed -- yes, whom I made!

When Israel was a young man, I loved him like a son, and I summoned my son out of Egypt.

and I will be a father to you, and you will be my sons and daughters," says the All-Powerful Lord.

Sons born during one's youth are like arrows in a warrior's hand.

Grandchildren are like a crown to the elderly, and the glory of children is their parents.

A person who has friends may be harmed by them, but there is a friend who sticks closer than a brother.

For whoever does the will of God is my brother and sister and mother."

But he replied to them, "My mother and my brothers are those who hear the word of God and do it."

Now this is eternal life -- that they know you, the only true God, and Jesus Christ, whom you sent.

For in Christ Jesus you are all sons of God through faith.

Exodus 6:7
Verse Concepts
I Will Be Their GodGod Bringing Israel Out Of EgyptRemoving BurdensYou Will Know I Am The Lord
Assurance, basis ofGod, The LordUnity, Of God's People

I will take you to myself for a people, and I will be your God. Then you will know that I am the Lord your God, who brought you out from your enslavement to the Egyptians.

I will become his father and he will become my son. When he sins, I will correct him with the rod of men and with wounds inflicted by human beings. But my loyal love will not be removed from him as I removed it from Saul, whom I removed from before you.

I will become his father and he will become my son. I will never withhold my loyal love from him, as I withheld it from the one who ruled before you. I will put him in permanent charge of my house and my kingdom; his dynasty will be permanent."'"

And in the same way he took the cup after they had eaten, saying, "This cup that is poured out for you is the new covenant in my blood.

for this is my blood, the blood of the covenant, that is poured out for many for the forgiveness of sins.

He said to them, "This is my blood, the blood of the covenant, that is poured out for many.

And what mutual agreement does the temple of God have with idols? For we are the temple of the living God, just as God said, "I will live in them and will walk among them, and I will be their God, and they will be my people."

Leviticus 26:12
Verse Concepts
I Will Be Their GodGod, Human Descriptions OfWalking With GodFellowship, With God
God, Present EverywhereLordship, Human And DivineWalking

I will walk among you, and I will be your God and you will be my people.

And the Holy Spirit also witnesses to us, for after saying, "This is the covenant that I will establish with them after those days, says the Lord. I will put my laws on their hearts and I will inscribe them on their minds," then he says, "Their sins and their lawless deeds I will remember no longer."read more.
Now where there is forgiveness of these, there is no longer any offering for sin.

"But I will make a new covenant with the whole nation of Israel after I plant them back in the land," says the Lord. "I will put my law within them and write it on their hearts and minds. I will be their God and they will be my people. "People will no longer need to teach their neighbors and relatives to know me. For all of them, from the least important to the most important, will know me," says the Lord. "For I will forgive their sin and will no longer call to mind the wrong they have done."

For he is our peace, the one who made both groups into one and who destroyed the middle wall of partition, the hostility, when he nullified in his flesh the law of commandments in decrees. He did this to create in himself one new man out of two, thus making peace, and to reconcile them both in one body to God through the cross, by which the hostility has been killed.

making every effort to keep the unity of the Spirit in the bond of peace.

If possible, so far as it depends on you, live peaceably with all people.

So then, let us pursue what makes for peace and for building up one another.

Pursue peace with everyone, and holiness, for without it no one will see the Lord.

So then, if you bring your gift to the altar and there remember that your brother has something against you, leave your gift there in front of the altar. First go and be reconciled to your brother and then come and present your gift.

The righteous person is cautious in his friendship, but the way of the wicked leads them astray.

Then the man said, "This one at last is bone of my bones and flesh of my flesh; this one will be called 'woman,' for she was taken out of man."

Husbands, love your wives and do not be embittered against them.

The overseer then must be above reproach, the husband of one wife, temperate, self-controlled, respectable, hospitable, an able teacher, not a drunkard, not violent, but gentle, not contentious, free from the love of money. He must manage his own household well and keep his children in control without losing his dignity.read more.
But if someone does not know how to manage his own household, how will he care for the church of God?

No one has greater love than this -- that one lays down his life for his friends. You are my friends if you do what I command you. I no longer call you slaves, because the slave does not understand what his master is doing. But I have called you friends, because I have revealed to you everything I heard from my Father.

The second is like it: 'Love your neighbor as yourself.'

Everyone will know by this that you are my disciples -- if you have love for one another."

And the king will answer them, 'I tell you the truth, just as you did it for one of the least of these brothers or sisters of mine, you did it for me.'

A noble wife is the crown of her husband, but the wife who acts shamefully is like rottenness in his bones.

Finally, all of you be harmonious, sympathetic, affectionate, compassionate, and humble.

Then Abraham bowed down with his face to the ground and laughed as he said to himself, "Can a son be born to a man who is a hundred years old? Can Sarah bear a child at the age of ninety?"

Faithful are the wounds of a friend, but the kisses of an enemy are excessive.

We are coworkers belonging to God. You are God's field, God's building.

When all the leaders of Israel came to the king at Hebron, King David made an agreement with them in Hebron before the Lord. They designated David as king over Israel.

But you must return to your God, by maintaining love and justice, and by waiting for your God to return to you.

and I will be a father to you, and you will be my sons and daughters," says the All-Powerful Lord.

"'No man is to approach any close relative to have sexual intercourse with her. I am the Lord.

Ruth knelt before him with her forehead to the ground and said to him, "Why are you so kind and so attentive to me, even though I am a foreigner?"

And to all these virtues add love, which is the perfect bond.

Wives, submit to your husbands, as is fitting in the Lord.

Not only this, but we also rejoice in God through our Lord Jesus Christ, through whom we have now received this reconciliation.

It is actually reported that sexual immorality exists among you, the kind of immorality that is not permitted even among the Gentiles, so that someone is cohabiting with his father's wife.

Relationships To This Day

The older daughter gave birth to a son and named him Moab. He is the ancestor of the Moabites of today.

Now with regard to the issues you wrote about: "It is good for a man not to have sexual relations with a woman."

Do not rely on a friend; do not trust a companion! Don't even share secrets with the one who lies in your arms!

Now let the king issue a written interdict so that it cannot be altered, according to the law of the Medes and Persians, which cannot be changed.